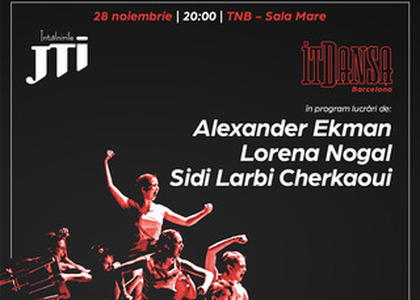 JTI Encounters. `IT Dansa ` dance company from Barcelona marks the 20th edition of the event !

Over the years, JTI has been investing around 3 million euros in this event, which has became a national cultural brand for the contemporary dance. Once again this year, the event is going to be organised by Art Production Foundation and supported by Silvia Ghia`s artistic consultance.

This release issued by the press office `JTI Encounters` concentrates in a few lines the extraordinary activity led by Gilda Lazr, JTI manager, over two decades. An original, ambitious and tenacious project, worthy of sincere admiration. Each performance was a major event for the Romanian cultural life.

For the past 19 years, JTI Encounters proposed the Romanian public performances given by the most significant companies in the world, with resounding names and intense activity. But for the 20th anniversary, Gilda Lazr has chosen to `...meet the future, as these young people are going to dance for big companies. We are lucky to have them tonight, at the beginning of their artistic life.

Within IT Dansa, where there are admitted few over 20 dancers with ages between 18 and 23, the main activity is to prepare the future artists. Well-renowned choreographers like Jir Kylin, Ohad Naharin, Rui Horta, Nacho Duato, Ramon Oller, Toni Mira, Akram Khan, Sidi Larbi Cherkaoui or Alexander Ekman not only did they teach, but they also created special choregraphies for IT Dansa. They were, for sure, inspired by the talent and the freshness of the young dancers. And the periods they worked together were sure enough extremely fruitful, not only for the apprentices but for the masters too. Generally, after graduation 80% of the artists prepared at IT Dansa are hired in big companies like Nederlands Dans Theater (Holland), Verpommer Theatre (Germany), Euregio Staatstheater am Gmeplatz (Germany), el Ballet Gulbenkian (Portugal), Abcdance Company (Austria), Companhia do Bailado (Portugal). And their career begins and develops spectacularly. But it started - nobody forgets that! - within IT Dansa, the dance company of the Barcelona Theatre Institute.

The performance delivered in Bucharest was a bursting of youth and talent, freshness and energy, inventivity and rigour. This makes me think of the illustrious instrumentalists, artists who strictly follow the notes and the bars from the part, but they allow themselves small impromptus with surprising effects, in the tiniest details of the music. Thus, the whole is imprinted with so much force and expressiveness that is hard to describe, composing the unmistakable signature of each interpreter. The dancers in the company don't stray from the rules imposed by the choreographer, but they grace and load the moves with what each of them has the best, the most sincere, the most beautiful and personal. We are witnessing a spectacular dance performance, governed by special rules - bodies perfectly shaped, tall and lissome figures; beauty and physical strength, a demonstration of virtuosity in which are involved perfect bodies. The dancers I saw are not physically `gorgeous` or `perfect` strictly by the aesthetic standards of the contemporary society; their beauty exudes from what they do, from their extraordinary commitment and devotion displayed on the scene, from their wild wish to tell us `something` that is essential, vital for them.

In order to achieve this result, they didn't bargain over any effort. They had been seriously rehearsing for long , and each of them brought in a pinch of the culture in which they had mentally and spiritually developed, they mixed them into a magic potion which they sipped with confidence and hope. We were presented with the result, brimming with glee and gratitude.

The most talented dancers of the Spanish Theater Institute performed three choregraphies on the Bucharest National Theater`s scene, created by poignant contemporary choreographers: Whim by Alexander Ekman, In Memoriam by Sidi Larbi Cherkaoui and The Prom by Lorena Nogal.

I am adding the name of the artistic manager of the company, Ms. Catherine Allard, who remembered, during a press conference, of the courses held by the famous Romanian dancer Gigi Cciuleanu that she gladfully attended to. From the same press conference that took place before the show I learned one more thing: Ms. Gilda Lazr expressed her hope that JTI Encounters should continue to bring important names and magical openings in Romania. `As you know, at the moment is being discussed by the commissions of The Chamber of Deputies a law project intended to interdict any sponsorship from the tobacco companies. Dozens of personalities from the cultural world fight against this project by means of an official letter in which they call for lucidity and balance`, stated Gilda Lazr. `I hope so much to see you next year and to offer the Romanian public a new Encounter with beauty, art, with grace and refinement, with dance taken to the utmost`, concluded the JTI manager. It is also what we want.