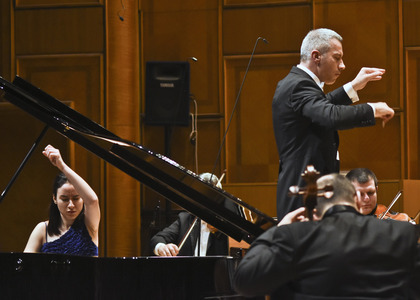 The first event hosted by the Radio Hall in 2020 was the inaugural concert from the special series prepared by the Radio Romania Orchestras and Choirs to celebrate the International Beethoven Year, officially celebrated worldwide upon 250th anniversary since the great composer's birth.

The other night, Tiberiu Soare led the Radio Chamber Orchestra during the first event from the Beethoven 250 series and the first work in the program was the Coriolan Overture, followed by two of the" Titan from Bonn": Concerto No. 5 in for Piano and Orchestra - Emperor and Symphony No 3 Eroica. Special guest during yesterday's event was the young pianist Adela Liculescu.