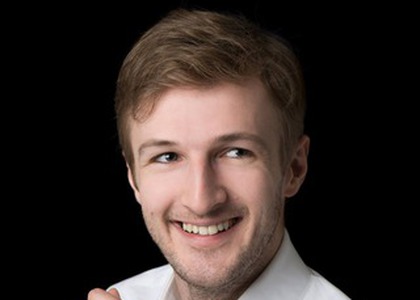 On Friday, February 7, during the Radio Music Season, there will be a concert held by the National Radio Orchestra under the baton of the young conductor Andrei Feher, musical director of the Kitchener-Waterloo Symphony Orchestra. The program, which will be broadcasted live by Radio Romania Musical, includes romantic creations: Concert No.1 Op. 11 in Mi Minor for Piano and Orchestra by Frédéric Chopin, soloist Toma Popovici, then two works signed by Antonin Dvořák: Overtura Op. 91 In Nature's Realm and the Symphonic Poem Op. 109 The Golden Spinning Wheel. More details from the conductor, in the following interview:

You are for the second time at the desk of the National Radio Orchestra. How do you describe the collaboration with the ensemble?

In a way it is much easier because now I know the orchestra better, I know the people and I made some friends last time. And knowing the orchestra very well is easier to know how to measure time, I also know how loaded the program is and what difficulties each piece presents.

You have opted for a romantic program - Chopin and Dvorak. Please give us some details!

We had several pieces to choose from, but Chopin No.1 was the concert that the pianist also chose. And then, being a pretty long concert, it must necessarily be seen how the rest is scheduled. And I thought that Dvorak ... we hear a lot of the 8th, the 9th symphony, the 7th - from time to time, but he composed five symphonic poems after all the symphonies which are not sung at all unfortunately. And knowing them, we said we would do something that the orchestra had never played. We put them together, because Dvorak being the kind of poet that resembles in his writing with Chopin goes to perfection, Chopin being a romantic.

What do you expect from this concert? How do you think it will be received by the public?

I think that's fine. For me, it matters most to be interested in the orchestra and to understand why they are on stage. And then, if there is also passion and energy on stage, the normal audience will get into the story a lot easier. Chopin is well known, Dvorak will be a discovery for everyone.

From the 2018-2019 season, you are the musical director of the Kitchener-Waterloo Symphony Orchestra. How do you describe this experience?

It is an interesting experience because it is also the first orchestra I have and works in the long term. I mean, I see them pretty regularly, about 10-12 weeks every year, so I have the goal and the purpose and I know where I want to be in a few years. It is a generation that has been in the orchestra for a long time and now, slowly, slowly, is leaving and the orchestra needs to be renewed. Instead, the cohesion and homogeneity of the group must be rebuilt. The level of the orchestra must be raised, as in any part, and the difference between styles must be made; we don't sing Brahms and Beethoven in the same way, so we have some reflexes that come easier over time.

I look forward to a concert where, as I said, we will discover two Dvorak pieces that are rarely sung, but at the same time we will have the Chopin Concerto with the soloist Toma Popovici. And I warmly invite you, because every time I went to Bucharest I felt a very warm and knowledgeable audience so I hope there are as many people as possible.