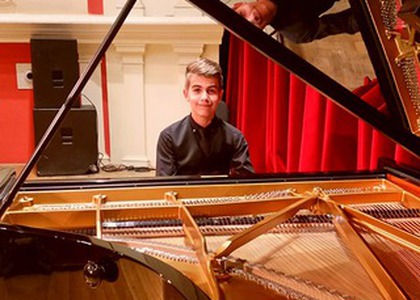 Although quite rare, unfortunately, the Tuesday Night Season brings to the public in Bucharest young performers from other cities of the country, performers recommended by a series of remarkable national and international successes.Today he is a student in the 10th grade at the Oradea High School of Arts, but since he was 12 years old,he has also been attending the piano classes of the Faculty of Music in Debrecen, in the class of Prof. Dr.Duffek Mihaly. He has taken part in numerous master classes given by key figures in the art of keyboard such as Horia Maxim - Romania, Elizabeth Sombart - France, Jean-Claude Denervaund - Switzerland, Carmen Daniela Gililov - Germany, Duffek Mihaly and Pless Attila - Hungary.He received diplomas of excellence from Oradea City Hall, Resonance Romania Foundation and Kiwanis Art Oradea.

The list of his professional successes attracts attention and demands respect. We selected a few:

There are so many compelling reasons why pianist Dominik Ilisz was invited to perform a recital during the Tuesday Night Season, in the current season of the George Enescu Philharmonic in Bucharest.