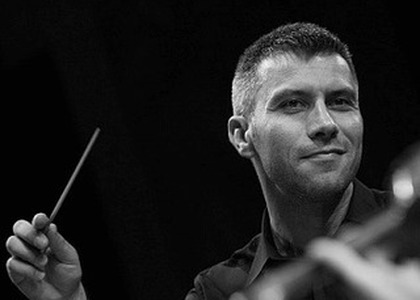 Interview with the new main conductor of the Sibiu Philharmonic Orchestra, Tiberiu Soare

The new season of the Sibiu Philharmonic made its debut on the 1st of October 2020 with a concert of opposites composed by Joseph Haydn and Ludwig van Beethoven, that had Tiberiu Soare in charge and featured Diana Jipa as a soloist. Starting with this autumn, TiberiuSoare is the new main conductor of the Sibiu Orchestra.

Tiberiu Soare, you are the new main conductor of the Sibiu Philharmonic after a long period of time in which the institution didn't have a main conductor. How did this proposal come about?

It's true that I already am the conductor of the Bucharest National Opera, but my partnership with the Sibiu Philharmonic is already a prolonged one. Their new manager, Mr. CristianLupes, invited me for a series of concerts and, afterwards, I somehow reached the conclusion that it would be better to conclude a contract for one season. So it's a fixed-term contract but it is, indeed, regarding this job of main conductor, which is very good. This also gives the possibility of organizing six or seven concerts during a season which will be under my baton. This is really good because I can still comply with my obligations with the Bucharest Opera and the National Music University of Bucharest, where I still have a job in the conducting department. In the same time, we can work more on certain things regarding the orchestra's playing style. I won't get into any technical details now, but there are certain issues that a main conductor can somehow imprint through his working manner on the way in which the orchestra plays.

That was my second question, what are you hoping to achieve with the Sibiu Philharmonic Orchestra, especially in terms of sound?

There are very interesting things there because, as with most Romanian orchestras, there has been a generation change in the last few years. Some young musicians turned up as well as some musicians that won some contests in very difficult conditions. Truth be told, having a place in a national orchestra isn't easy. You have go through a whole series of rehearsals, auditions and competitions until earning that particular job. This is very good atmosphere because everybody is very driven. On the other hand, here, in Sibiu, there is a long tradition of quality music. I am very aware of the fact that the first professional orchestra appeared in 1774, for example. Think about it, Mozart was alive! In 1774, under the patronage of Samuel von Brukenthal, who was the governor of Transylvania at the time. The current and institutional form of the Philharmonic dates back to 1949 and owes its beginning to Henry Selbing, the conductor and director Henry Selbing, and it's obvious that big names like PetreSbarcea were there. My younger colleague, Gabriel Bebeselea, was also a conductor there for a while. All of these people have a lot to do with the establishing and the preserving of the Sibiu Philharmonic interpretation tradition. As a consequence, as a conductor, I feel compelled to pay attention to all of these things. There are many very good and established things and the orchestra has its own manner of approaching certain pieces. What can be done is to follow some sort of convergence of stylistic lines, that being the way in which the conductor - in this case, TiberiuSoare - understands a certain, let's say, Beethoven or Brahms piece, and also the way in which the orchestra proposes that specific interpretation. Reaching a common denominator always leads to very nice results.

And one last question, how did you find the ensemble after this pandemic period, because a first concert has already taken place? What is the vibe among the orchestra?

Surprisingly fit! In fact, the Sibiu Philharmonic was one of the institutions that got back on the horse since the summer. They had a sporadic open-air season, organized on a stage that was sat on the front entrance of the Philharmonic, at the Thalia Hall. Basically, an esplanade place has been created. In August, we even had a concert with Razvan Suma as an associate, so it can't really be said that the musicians got out of shape. The only problem remains the one that every orchestra on the face of the planet is dealing with, that being the exercise of playing together. That's the matter on which we truly are having some trouble but we are trying our best to fix the consequences of the scene absence as soon as possible.