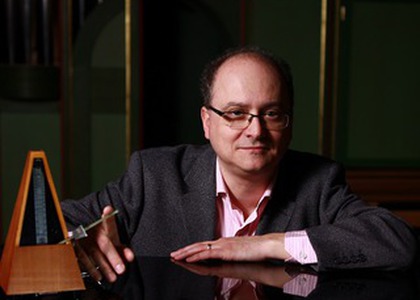 On Thursday, the 8th of October, the "Für Ulisse" Quartet written by composer Dan Deiu was going to be premiered at Sala Radio.The concert was cancelled due to the precautions taken by the Departmentfor Emergency Situations in Bucharest. The concerto can be listened to on Friday, the 9th of October, in Cluj, during the season of the Transilvania Orchestra.

Judging by the title, the paraphrasing of the famous "Für Elise" bagatelle by Ludwig van Beethoven is obvious, but I am asking you to unveil who Ulisse is and what the story of this quartet is.

Yes, I am Ulisse, sort of to say, because I took Ulisse as a model, the forever-seeking Ulisse, who is a symbol of pilgrimage throughout Beethoven's music. Whichis what I conceived in the shape of a string quartet, I'm talking about the five constituent pieces, which I called Beethoven Etudes, thus Beethovenian Studies. The five pieces which make up Quartet no. 7 pave the way for more nooks of Beethoven's music which, as a teacher of form, as an analyst, and as a mere music lover, I have discovered in time, during its creation. The first part, thus, entitled The Labyrinth of Silence, brings forward Beethovenian material, which is merely expanded, sort of to say, not necessarily developed, expanded with air bubbles in between its molecules, so that Beethoven's music dilates. It is as if this material would be subjected to blinding lights, to great heat which makes the Beethovenian molecules dilate and, thus, expand. Sure, the second part, the one I entitled Idyll and hymn of gratification, alternates other two typically Beethovenian universes, the Scherzo and the Hymn of Gratification. They will fuze. Thus, out of two very different musical genres, a playful and profane one, and an internalized, pensive and sacred one, they end up fuzing and surmount to an apotheotis which is ascendant and, at the same time, even Bacchic, I could say. A third labyrinth opens itself to us in the third part, which I entitled Labirinto del bolero, Ravel's Tattoo, Tatuajul lui Ravel. And here,I just combine the motto of the Fifth Symphony, which everyone knows by its bolero rhythm, thus reaching a sort of pastiche, an all the more deranged version of the Ravelian bolero, and through which we get a glimpse at the theme from Ode to Joy, for instance, or the first theme of the Concerto no. 4 for piano. Everything is done with polytonal derailments and through an angry dramatization of the thematic content. Here, I mean to say that I've got the idea of introducing what Cioran used to say about Beethoven, more precisely that: together with Beethoven, anger makes its appearance in the history of music. In the end of this part, it's true, I wrote angry music. The fourth part, Moonlight Maze, thus, a labyrinth still, but one which makes reference to Moonlight Sonata, additionally brings an evolution from grave to acute, through a dancing element, thus, it brings a hymn on top of all of this sonorous magma, similar to Ave Maria by Gounod, which I entitled Ave Circe, in Odyssey-like key, of course. It is yet another halt in Ulisse's journey, in his pilgrimage to the recoveryof the spiritual shore of Ithaka island. And here, of course, we have a development which is encompassed in the corridor of Grosse Fuge op. 133 in order to get to the shore with the obsessive and hypnotic repetition of Moonlight Sonata, in acute register, for first chair, in Pizzicato. Finally, in the last part, the fifth one, which I entitled Fantasia fantomagica sul nome Beethoven, thus, AFantasy Named Beethoven, I took the sounds which make up Beethoven's name B flat, E-twice, thus, E-E, I turned T into UT, thus C, and H-B, B flat, E, C, B and I created, starting from this cell, a Rondo Pastiche, in the style of the quarters op. 130, op. 132, therefore, in a pure classical-romatic style which, at some point, gets broken. We get used to that music even during break time, then during break time again, the music goes on somehow, we got used to it and it goes on in our head, but we don't hear it anymore. It's as if everything gets ruined and it disappears from its physical being, lingering in our memory, thus playing incessantly. This lessening of speech ends in a page-turning rustle made by the four instrumentalists, in the end, a sign of the passage of time, a fluttering of Moonlight Sonata over Beethoven's spirit. Thus, the transformation of sound into noise and, at the same time, into symbol-sound, like a being in the wind. This noisesounds like this, like when you flip the music sheet. In short, this was a description of what I've attempted in Quartet no. 7. If you asked me how I would concisely define this style, I would say that we could name it ready-made morphogenetic. Why? Because I work with ready-made material, hence ready-made. Everything belongs to Beethoven, but the handling is transformational. I transform Beethoven's material and I say what I see fit with the help of these vocables. Thus, I could say that it is a beneficial collaboration in time, in which Beethoven's material inspired me to write a contemporary quartet, a current one, connected to the issue of the pandemic, because I wrote it during the state of emergency, and, not least, the support of the Beethovenian material created compositional ideas which I was able to take from Beethoven and transform them, morph them into my own structures and ideas.

Your work will be performed by the Arcadia Quartet. We know that in some cases, the composers ask to be present at rehearsals. Have you had any requests with respect to the performance?

No and I wrote this quartet with great pleasure for the admirable Arcadia Quartet which I've known for a long time and appreciate superlatively. I consider them absolutely extraordinary musicians, possessing great experience, both individual and quartet-related, and I have complete faith in what they are going to do. We are going to have only one general rehearsal, in the morning of the concert. Therefore, generally speaking, I am not the kind of composer who nags the performers and wants as many rehearsals as possible. I believe that what I had to say, I've said through the music sheets and it is the performers' duty to decode and reinterpret what I wrote there. Thus, I will let myself be surprised by the experience and talent of the members of the Arcadia Quartet.

Seeing that the work has appeared as a result of an order placed by Radio Romania Muzical and Rotary Club Pipera, especially for this concerto, what exactly did you insist on being present out of the style of the Arcadia Quartet in the architecture of this work?

I didn't intend to write a quartet to only be performed by Arcadia. I think it is important that the Arcadia Quartet is going to to hold the premiere, but I don't exclude other approaches of other quartet assemblies. Of course I've known them for a long time and I know how they perform Beethoven, and then I thought more about the typically Beethovenian quartet gestures which I took from Beethoven's work and with which I went further on, sort of to say, in quotation marks. Thus, the classical-romantic idiom is perfectly assimilated by the Arcadia Quartet and I haven't done anything but walk further on, continuing this idiom, even in the fifth part, and compose a tonal music in Beethoven's style, honest and with that evasion at the end, which makes you wonder.