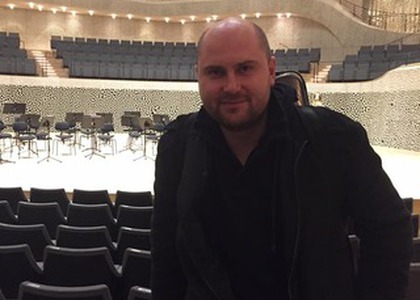 Cristian Andriș, the member of the Zurich Chamber Orchestra, has recently finished a recording session along with the renowned violinist Daniel Hope, the musical director of the ensemble.

When and how did you become a collaborator of the Zurich Chamber Orchestra?

In 2012, an audition for the possible collaborators of the orchestra took place, and, taking part in it, I was selected by the entire orchestra to join this ensemble. It is, obviously, an ensemble which is in a permanent shift of generations. It is also an ensemble that celebrates 75 years of existence this year. I would classify my experience with the Zurich Chamber Orchestra as one of the most exciting collaborations I currently have, on a professional level.

What was the life in this orchestra like during this pandemic?

I've been talking to my colleagues who play in the orchestra on a permanent basis. Of course, the state has been supporting all the Swiss orchestras, and this was a great help for the people who are a part of the Swiss cultural field. The orchestra could not perform, but the final concert of the season, which took place in July, could be performed in front of a live audience. The season-opening will take place now, in October, but we have already had two concerts in Essen with Daniel Hope, very successful concerts. Also, we made a recording, but I cannot tell you the name of the next CD, which is the fourth CD the Zurich Chamber Orchestra is recording for the Deutsche Grammophon, in collaboration with Daniel Hope.

But we can talk about those CDs that have already been recorded.

Firstly, I'd like to tell you a few words about Daniel Hope, who is an extraordinary violinist. For those who follow him both on social media and in his artistic pursuits, he is a person who... you just cannot figure out how can anyone accomplish so many things in just the 24 hours of the day.

Also, concerning his accomplishments during the pandemic, the project Hope at Home, Daniel is one of the most creative artists with whom I had the chance to work. To stay in touch with the audience, Daniel found a loophole for collaboration with ARTE TV channel, and broadcast classical music concerts straight from his living-room, inviting daily his friends who play different musical genres. So, besides his friends from classical music, he also invited those from jazz and soul. Therefore, at the end and because of the success of these broadcastings - which gathered more than 5 million views for the 60 episodes - he decided to make a CD, as a testament to this period when people had to stay home. The Zurich Chamber Orchestra featured in episode 60 of Hope at Home, where it gave a concert in Switzerland. When he was able to leave his living-room, Daniel continued the Hope at Home tradition and went to particular halls where he could keep on playing.

We cannot talk about the next CD, but maybe you could tell us when it will be released?

The CD was recorded in Zurich, in the rehearsal room of the Zurich Chamber Orchestra. We had the help of the Teledex guys from Berlin, who are the sound engineers with whom Daniel often works. As far as I know, Deutsche Grammophon will release the CD the next year, and it will contain the works that will urge the lovers of classical music to acquire it.

Taking into account the unique situation that you are in, how do you think your travels will unfold in the following months?

Currently, I'm living in Switzerland, teaching in Romania, and also have the Romanian Chamber Orchestra project there. There will be no quarantine for me when coming to Romania, but I will have to stay isolated for ten days when going back to Switzerland. It's a very tough time for travelling for any musician. I've talked to maestros Cristian Măcelaru and Gabriel Bebeșelea recently, and they both told me that they are undergoing covid-19 tests weekly for the possibility of travelling. There are researches made throughout the world, which show that due to the social distancing, there were almost no cases of viral transmission in the concert halls. I consider that the cultural field does not represent a risk for either the audience or musicians.

The album Hope@home by violinist Daniel Hope can be listened to at Radio Romania Music, in a national premiere, on Monday, the 12th of October, from 7 PM.