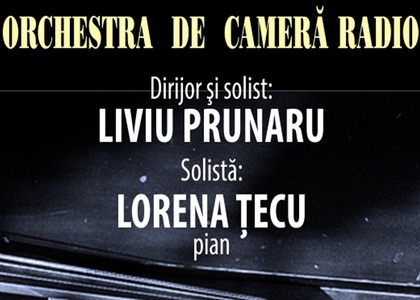 On Wednesday, February 27, at 7:00 p.m., the Radio Chamber Orchestra is holding a concert featuring violinist Liviu Prunaru, Concertmaster of the Royal Concertgebow Orhestra in Amsterdam and pianist Lorena Țecu, Staff Pianist at the Boston University College of Fine Arts and the New England Conservatory of Music in Boston. The program brings together works by three great composers: Wolfgang Amadeus Mozart - Sonata da Chiesa in E Flat Major, Sonata da Chiesa in B Flat Major, Joseph Haydn - Concerto for Violin, Piano and Orchestra in F Major, and Felix Mendelssohn, Capriccio in G Minor and Concerto for Violin, Piano and Orchestra in D Minor. I had the pleasure of talking to the two soloists at the end of one of the rehearsals for the concert.

Mister Liviu Prunaru, you selected for this concert a pretty unusual program, including works that are rarely performed here.

The evening's unusual program is part of my effort to bring to the forefront works that are not that commonly interpreted. I usually perform such works not only in Romania, but also in other countries. That doesn't mean that they are not known, they are very well known works, but they are not as popular here. I know that they perform Mendelssohn every now and then. This concerto can run as long as 45 minutes; we made a few cuts that they used to make at the Menuhin Academy, under the supervision of Alberto Lysy and Menuhin himself, and we have achieved a version of this concerto that I believe expresses everything without compromise. It's a wonderful piece. The idea is more complex. This concert is about bringing to the stage of the Radio Hall my former high school and college classmate - Lorena Țecu, also from Craiova, just like me; she lives abroad too, she studied with me at the International Menuhin Music Academy in Switzerland and it is an amazing opportunity to perform together on the Radio stage. As far as I know, it is actually a first for Lorena.

Here is how the pianist Lorena Țecu described her emotions during her debut at the Radio Hall and her friendship with her stage partner, Liviu Prunaru.

I think I had a recital here a long time ago, but I have never performed with an orchestra before, so this is a first. I came from America to make my debut on the Radio. I'm always nervous when I perform in Romania. It is always hardest to perform in your home country. Even though you have your friends' and your family's support, you want to do your best when you return, especially after living abroad for so many years, since people's expectations are greater. Liviu is already like a family member to me. We've known each other since we were children, we grew up together in Craiova, went to the same school, knew each other's families. Thanks to Liviu, I got into the International Menuhin Academy in Switzerland. When I was in Switzerland, we used to play together a lot. After I went to America it was harder to keep in touch, because of the distance, but we are glad that we have this kind of projects to work on together, not only to meet each other during vacations.

How did you choose the program for this concert?

I performed Haydn for the first time in Craiova, a few years ago. This a concerto has never been performed in Romania before - and it was Liviu's suggestion. Mendelssohn is also a concerto that I played a lot with our academy maestro and we both share a lot pleasant memories about this piece. It is a very meaningful concerto.

Mister Liviu Prunaru, we will see you playing two roles - the soloist and the conductor - and I would like you to tell us, from your personal point of view, what this experience means to you.

Don't expect to see me holding a baton. I will never do that. Conducting means that I will be performing along with the orchestra, but without having to realize someone else's musical interpretation. This was the main idea, because I wanted to be the one to work with the orchestra. As a soloist, I only have an hour with the orchestra the day before the concert, another hour the day of the concert and that's it, we're done. I wanted to interact more with the orchestra. I notice that everybody is quick to react to my directions. The only thing different at the concert is that I will ask them to stand while they play. It might be unpleasant or uncomfortable at the beginning, but afterwards, on stage, it has the right result. It's different when somebody performs while standing and maintaining a straight posture then when they sit on a chair. I want everybody to feel like a soloist.