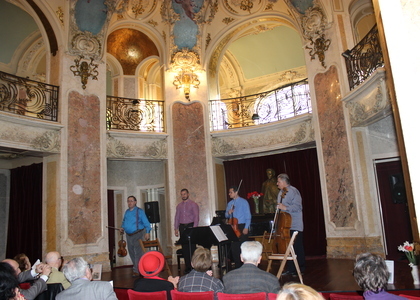 A short while after granting music lovers the opportunity to meet, during a recital, with George Enescu's violins, the museum bearing his name invited the audience to a new event of the series meant to honour the 60 years that have elapsed since the Maestro passed away, releasing volumes VII-VIII of Enescu's Notebooks, published by the ICR Publishing House and edited by violinist Șerban Lupu. These, as well as the ones published a decade ago, put together mostly special scores that the soloist discovered in the museum's archives, but as sketches on which he worked for a long while, managing to give them a final structure, as close as possible to the one that the composer probably meant to create, as the sometimes unintelligible notes suggest.

Passionate about Enescian music, ȘerbanLupu detailed the 'history' of the musical pieces included in the volumes, coming from extremely diverse periods of time, considered to be 'splinters from the worktable' - as the musical critic Malcolm MacDonald used to say - bearing the touch of constant landmarks found in famous opuses. After the speech of Cristina Andrei, the museum's director, the one who also collaborated to the research of the first published manuscripts (2005) in this 'series', musicologist Viorel Cosma continued on the 'given topic' in his own usual manner. Afterwards, we listened to several of the pages that have now appeared for the first time, interpreted by the same violinist who also performed miniatures by George Enescu at the age of 9 (the Legends) or when he was a grown-up (Union's Circle Dance, Impressions en Style Roumain), marked by folkloric influences and the evocation of his native heath, with strong allusions to the famous Fiddler sequence or even to other moments (and headings ) from the Impressions from Childhood suite; the same sensitive meditation was outlined in Serenade en Sourdine written for violin and cello, performed by Șerban Lupu and Dan Cavassi, instrumentalists who then played, together with the violinist Iulian Popovici, Nocturne 'Villa d'Avrayen', made for the musical meetings in the house of the Menuhins, close to Paris, where George Enescu often returned for the opportunity of being next to renown musicians.

Works which one can feel as sketchy compositions, some brought to simple tones, with a certain tenderness, or difficult in terms of violin-intended works, also trying different colour combinations, in faint tones, preferring a more 'settled' tempo, the only piece that was more incisive being that dance in which an excerpt from the Royal Hymn was quoted, a WWI work. A dash through shards of Enescian inspiration, coming from the years of his youth until his maturity, perhaps attempts and variants that were preparing quintessential opuses of his creation, now passionately and earnestly decoded, with the wish of granting - partly performed for the first time - pages signed by George Enescu that can be found in the museum and that, on that evening, paid a homage to the artist's personality through on a special evening defining it as an event, under the title of 'George Enescu Special'.

In the Cantacuzino Palace's recitation room, a large audience watched the whole programme with interest and emotion, but once again, musical critics and composers - the ones who vie for the furthering and acknowledging of Enescian creation - were not there. But what matters is the fact that new volumes were released, volumes including scores for violin and piano, for solo piano or for cameral ensembles, partly brought to spectators by skilled instrumentalists, just as dedicated to George Enescu's music.