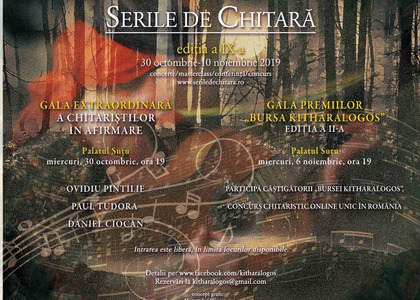 On Wednesday, November 6th, at 7 p.m., at Sutu Palace, during the "Iosif Sava" Musical Season of the ACCUMM Foundation, the 6th concert of the International "Guitar Evenings" Festival, the 9th edition will be taking place."The Kitharalogos Scholarship" winners' gala presents the winners of the second edition of a unique online competition in Romania, with total prizes worth 2000 euros, including a scholarship offered by UCIMR at ICon Arts Transylvania 2020.The competition is aimed at young guitarists up to 30 years old. They are invited to post on the association's YouTube page a work written in the last years by the Romanian composers for the festival, along with another 4-9 minutes work.

Through this project, the association aims to stimulate not only the composers, but also the young performers to sing and to promote the very good songsrequired by the association in the last years for the "Musica" project. On the list of works to choose from, there are composers such as Dan Dediu, Carmen Cârneci, Gabriel Mălăncioiu, Gabriel Almaşi, Sebastian Androne, Cătălin Ştefănescu-Pătraşcu.The jury consisting of teachers-performers and composers from the Universities and Academies of Music in the country, chaired by Rémi Jousselme, an important French guitarist who will be performing at the festival, has already decided on the three winners, whowill be announced on the evening of the concert.The winner of the first prize will be rewarded with 2500 RON and the scholarship offered by UCIMR, and those on the second and third places will receive 2000, respectively 1500 RON.