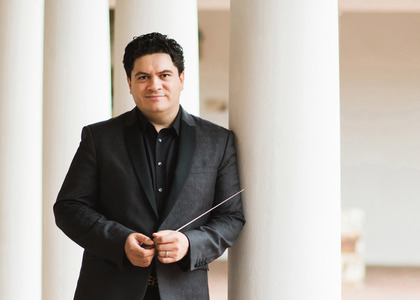 Conductor Cristian Măcelaru and cellist Andrei Ionita, along with the National Orchestra of Belgium, in Bozar, on the National Day of Romania

Cristian Măcelaru,the conductor who, starting from 2021, will be the successor of the French conductor Emmanuel Krivine, at the head of the National Orchestra of France, and Andrei Ioniță, nicknamed by "The Times" "one of the most interesting cellists in the world", will give two concerts at the BOZAR Palace of Arts,on November 29th and on December 1st 2019, together with the National Orchestra of Belgium, within EUROPALIA. The Romanian Cultural Institute (RCI)coordinates the program of this edition of the International Festival of Arts EUROPALIA, in which Romania is invited.In the program of concerts from BOZAR, there will be includedthe Romanian Rhapsody no. 1 in La major by George Enescu,Concert for cello and orchestra by Edward Elgar and Symphony no. 5 by Serghei Prohofiev.