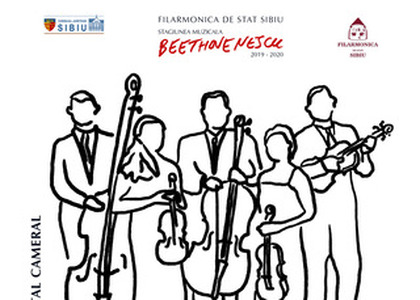 Beethoven masterpieces will be heard in an unique version, specially arranged for a string quintet. Musicians "with instrumental intonation, velvety timbre and unmatched descriptive depth" (Giornale dell'Umbria), members of the Wiener Kammersymphonie will play in an unique concert in Romania, at the invitation of the Sibiu State Philharmonic and the Austrian Cultural Forum in Bucharest. The landmark event during the Beethovenescu Season 2020-2021, the recital will take place on February 22, at 19.00, at Thalia Hall in Sibiu (Strada Cetăţii 3-5).

Wiener Kammersymphonie proposes two of the most sumptuous works of Ludwig van Beethoven's creation - "Coriolan Overture, opus 62" (composed in 1807) and "Symphony No. 8" (conceived in 1812). The ensemble - exclusively chords - "brings to the public the symphonic greatness of Beethoven. The most remarkable thing about the instruments used is the so-called fifth chord, which gives the sound a sometimes immeasurable depth. The musicians really managed to create the suggestion of a large orchestra, "said Jan- Willem van Ree, artistic director Edesche Concertzaal (Ede, The Netherlands). In the program of the concert in Sibiu, there are two Austrian pieces that will be listened to for the first time in Romania: "The second string quintet" by Johanna Doderer (2008) and "Portrait in three colors", composed in 2012 by Stefan Pelzl, special for Wiener Kammersymphonie.