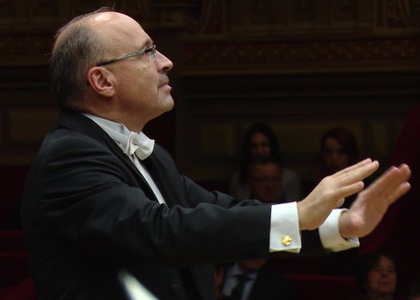 Mr. Iosif Ion Prunner, you are the conductor of the last two events of this month, in which the Orchestra and the Philharmonic Choir will perform on the Romanian Athenaeum stage the Byzantine Christmas Oratorio "The Birth of the Lord" by Paul Constantinescu. How did this idea come to you, given that this work is quite rarely performed here?

The idea was also related to the Paul Constantinescu Year - this year is dedicated to this composer. It is, I'd say, a representative work for the Romanian music regarding this holiday and not only. I consider it to be the most accomplished vocal-symphonic work in this particular Romanian genre. And, last but not least, I think that a high quality Romanian work should be performed this year. These were our main thoughts in scheduling this work to be performed. Back in 1947, on the 20th or the 21st of December, it was performed for the first time by Constantin Silvestri. The second concert was on the 5th of January, 1948. The dates are similar.

What do you find essential to know about and to listen for when it comes to this Romanian work, which is known to be a masterpiece?

One must take into consideration that beyond the Byzantine structure, beyond the influences of the psaltic music we find here, the Oratorio has a very classical construction at least in terms of the large choral ensembles, the vocal ensembles, the quartets being very classical in form. This must be understood by the audience and the specialists that there is this alternation between these recitatives with liturgy text, which are supplemented with this very classical form of the great vocal-instrumental ensembles.

What can you tell us about the soloists who will be on stage with you? How did they receive the invitation to perform the Oratorio?

They were delighted and it seems that for some of them, such as it's the case of soprano Veronica Roșca, they approach this work for the first time. There will also be other soloists: Antonela Bârnat, tenor Brătescu and bassist Iustinian Zetea.

Do you have any other works in mind that you'd like to conduct? From the Romanian vocal-symphonies, I mean.

I won't be the only conductor, there will be other Romanian conductors and even foreigners... I think that we should strongly encourage Romanian music next year, taking into consideration two things: the fact that it is the centenary of the Composers Union and that we must know how Romanian music is viewed by foreigners. It's enough to mention the Enescu Festival, during which director Vladimir Jurowski is extremely open to Romanian music and appreciates it very much. And then, I think we should do this too. And it's not only the vocal-symphonic works, but also the symphonic works. And the beginning of the year will be marked by a work that has not been performed for almost 30 years if not more, at least at the Philharmonic, probably neither in Bucharest - Dumitru Bughici's Suite.