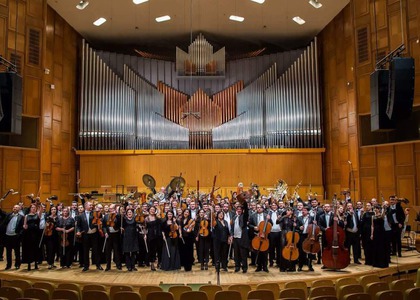 The two musicians took to the stage of the musical institution for the first concert of the 2019-2020 season of the National Radio Orchestra on Friday, October the 11th.

The opening of the National Radio Orchestra season can be perceived as a moment of retrospection - musicians and melomaniacs have the opportunity to re-evaluate the musical life of Bucharest, considering both the past seasons and the expectations for the next one. This perspective, open to the future, is what we were offered on Friday, October the 11th.

Two young musicians of exceptional importance took the stage of the Radio Halland proved their artistry and professionalism, in collaboration with the orchestra. The first thing that must be mentioned about Matei Varga is that he was lauded by the public, partly for his vivacious presence. Robert Schumann's Concerto in la mineur for piano and orchestra was well thought out by the soloist, from an interpretative point of view; from style-specific contrasts and calculated nuances, to a well-chosen tempo. It is obvious that the work was to the liking of the soloist and that the public could easily notice this:

"The soloist this evening exhibited brilliant pianistical skills and created beautiful moments. The orchestra seemed eager to perform. The conductor was excellent. All in all, a well performed concert, with wonderful moments!"

"The concert is classic, the performance was good, that is to say that it was to the taste of the audience. The orchestra was very well led by a young but professional conductor."

"It is a joy to meet him and to witness his skill and talent. We are glad that the season started with such a beautiful concert. So we are happyto be presentin concert halls again."

Obviously, the contribution of the conductor cannot be neglected - Christian Reif has shown great control over the orchestra, ability that not many young conductors can boast with. However, his experience must be contextualized: in July of this year, the German musician completed a three-year term as music director and principal conductor of the San Francisco Youth Symphony Orchestra. The end of the collaboration with the American ensemble was marked by a European tour, after which several specialized publications foretold a bright future for him; it seems that European cultural institutions share this view, given that the young conductor will debut with no less than eight European orchestras this year.

Obviously, his conducting skills are outstanding - in the second part of the evening we listened to the "Pictures at an exhibition" suite by Modest Mussorgski, in the arrangement of Maurice Ravel, a work that is demanding from several points of view. Finally, the liveliness and effort of the instrumentalists were appreciated and, together with the musical skills of Christian Reif, resulted in an impressive evening.