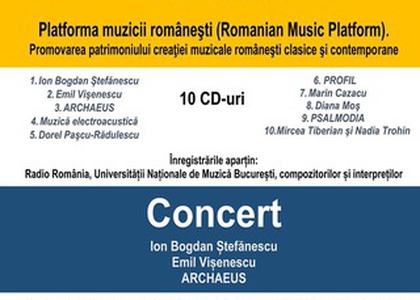 The classical and contemporary Romanian music was the focus of the event organised on Wednesday, 4th March 2020, held in the hall `George Enescu` at The National University of Music in Bucharest. On this occasion, the Romanian Music Platform, a series of 10 CDs, was launched, the results of the activity of important ensembles and musicians, who have in common the aspiration to valorise the creations of the Romanian composers, including Doina Rotaru, Sorin Lerescu, Mihaela Vosganian, Remus Georgescu, Dan Dediu, Adrian Iorgulescu and George Balint, among others.

About the purpose of this project spoke to us Diana Moș, the rector of the University:

"It is very important to inoculate everyone the idea that the Romanian music patrimony has very special values, which we must constantly promote. This project is just the first step, I hope many others will follow, and I also hope to fulfil this objective as a duty of honour, to promote Romanian music with everything it entails - first of all, composers, of course, but also interpreters, and I think we have proven over time that we have huge potential and it deserves making sacrifices to valorise it.

At the event opening, Roman Vlad, the project manager, spoke about the stages of creating the project and its importance, presenting the repertory directions approached. The characteristics of each CD was detailed by a teacher from The National University of Music, composer or soloist from the album. Among the speakers, we mention Ion Bogdan Stefanescu, Emil Vișenescu, Mircea Tiberian, Dan Dediu, Rodica Dănceanu and Nicolae Gheorghiță.

The musical part began with Two exercises of admiration by Liviu Dănceanu, interpreted by members of the Archaeus, ensemble founded by the composer. The first score, Americans, was performed by Ion Nedelciu on clarinet, accompanied on the piano by Rodica Dănceanu. The timbre of the bassoon was pleasantly interwoven with that of the cello in the second piece, Ukrainians for bassoon and cello, performed by Șerban Novac and Anca Vartolomei. Ion Bogdan Ștefănescu casually presented Four miniatures for solo flute by Octavian Nemescu, and the event ended with the work Worms of apple by the composer Dan Dediu, interpreted in

In the end, Roman Vlad, the project manager:

`The Romanian Music Platform project was co-financed by CNFIS, FDI domain 3 and was held between April and December 2019. Through the project, we proposed and we succeeded to create a highly professional teaching and research material, scores and CDs, based on the classical and contemporary Romanian musical creation of national and universal value; to valorise the exceptional compositional and performing activities of the teachers and students from the National University of Music in Bucharest, the most representative institution of music education in Romania; to develop a national and international material meant to promote Romania`s valuable musicians from the interpretative and composition school. Thus, we made a set of 10 CDs reflecting the following periods and repertoire directions: Romanian Byzantine music from XVII-XX centuries, chamber music of the XX-XXI centuries, contemporary avant-garde, electroacoustic music and interwar music in a contemporary jazz version. For the realization of the CDs at professional standards, many hours were invested working in operations such as material selection, audio digitization, audio refurbishments, special prints, mixing and mastering. The resulting CDs were: Ion Bogdan Stefanescu, Emil Vișenescu, Archaeus, Electroacoustic Music, Dorel Pascu Rădulescu and Orchestra Concerto, Ensemble Profile, Marin Cazacu, Diana Moș, Psalmodiachurch choir, Mircea Tiberian and Nadia Trohin. Throughout this project, our partners were Radio Romania and we thank them in this way, with great pleasure, for all the materials that have been made available to us and for everything they helped us with.