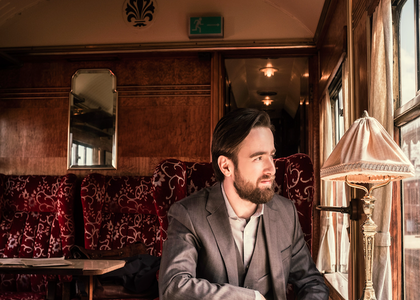 An album signed by the pianist Daniil Trifonov and the Philadelphia Symphony Orchestra ( led by Yannick Nezet Seguin) was released on 11th October 2019: the second and final episode of Rahmaninov Arrival. On this disc: the number 1 and 3 concerts by Sergei Rahmaninov, along with two pieces for solo piano, also by Rahmaninov, in the transcript of Daniil Trifonov.

It was indeed an initiatory journey both for the pianist and for the auditors: this foray into Rahmaninov's piano and orchestra concertsstarted on 12thOctober2018, with the release of the disc which included the number 2 and 4 concerts, and was completed in 2019 with this new album, on which we find the Concert no. 1 in a studio recording version and the Concerto no. 3 in a live recording version.

Daniil Trifonov also considered it as a spiritual journey in a 20th century Russia with all its anxietiesand with its irreplaceable traditions, which we fully discover in the first piece of this disc: The Bells - the first part of the Symphony no. 3 op. 35, under the same name by Rcahmaninov, in the transcript made by Daniil Trifonov himself. The bells area symbol of spirituality for allthe Orthodox peoples, as emphasized by the Russian pianist Daniil Trifonov in the booklet of this CD.

Rahmaninov himself confessed that of all his piano concerts, his favorite remains the no. 1; a sentimental side is certainly involved: the concert was written in 1891, when Rachmaninov was 18 years old and had not yet experienced the tragedy of the Czarist Russia collapse and of the exile from the new Soviet governance. In 1917, Rahmaninov returned to the music of Concert no. 1, but the revisions did not affect its character, which preserved the impetuosity of a youth that we cannot find in other of his concerting works.

Trifonov definintely knows how to bring to light this luminous and impetuous character of the music from Concert no. 1 by Sergei Rahmaninov - in 2016, when he recorded this concert, Trifonov himself was 25 years old and he resonated perfectly with this music. Together with the Philadelphia Symphony Orchestra( conductor Yannick Nezet Seguin), Trifonov offers us a vibrant and amazing version of virtuosity, especially in Part III.

Rahmaninov - Arrival - a journey among Rahmaninov's concerts, but also a foray into Rahmaninov's biography. While the first concert evokes the young Rahmaninov, in 1891 and in 1912, Rahmaninov had already gone through other experiences. The feeling of a dismantled world - that of the Russian aristocratic nobility of which he was a part, transpires from the famous Vocalization op. 34 no.14, transposed for the piano by Daniil Trifonovwith a special sensitivity.

Here we are, discussing the last concert and,from my point of view, the most expected one- Concert no. 3 op.30 in re minor, which was composed in 1909. As Daniil Trifonov also points out, it is one of the most complex and difficult of all the piano concerto literature, not only of Rahmaninov's creation. The concert brings togetherthrough its melody Russian cultural symbols and aspects of piano writing of an out of the ordinaryvirtuosity. Moreover, I would say that the whole concert has a special poetry, alternating the lyrical and impetuous moments, which are specific to the Russian spirit, perfectly understood by Daniil Trifonov. I think Daniil Trifonov's performance for this concert - impeccably sang live - shows us once again how important the cultural background of a musician is: because here we have not only a brilliant technique, a perfect aesthetic ethos brought to light, but something more: this fully understood spirit of the Russian soul, a people who gave Tchaikovsky, Rahmaninov, Tolstoy, and also Stalin.

Rahmaninov's album - Arrival can be listened for the first time on Radio Romania Musical on Monday, 21st October at 19.00.