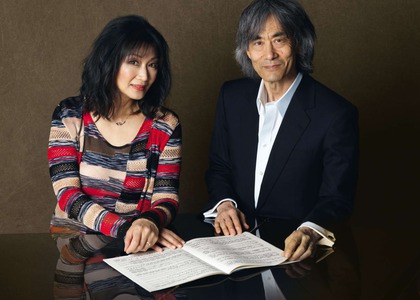 Albums in Premiere, included in the project "The Albums of the year 2019"

We can say that Beethoven is a constant companion in the life of the Kent Nagano - Mari Kodama family, as the two artists have said themselves. The two artists have dedicated years to explore the repertoire of the Titan from Bonn. There is, as is well known, an integral of his Symphonies by Kent Nagano at the desk of the Montreal Symphony. There also exists another integral of sonnets for the piano recorded by Mari Kodama, in 11 years of hard work, and now, we are talking about this new integral of Concerts forpiano and orchestra that brings together the recordings made between 2006 - 2019. "If you are interpreting all of these is as if you were traveling alongside Beethoven during his whole lifetime", according to Mari Kodama.

We continue to cover this integral that appeared on October 11, 2019 with the contest of the Deutsches Symphonie-Orchester Berlin, led by Kent Nagano. We also remind the fact that the album aims to mark the anniversary in 2020, of 250 years since the birth of the German creator. The 4 compact discs of this collection, published under the Berlin Classics logo, include, besides the 5 concerts for piano and orchestra, Concert no. 0 that we have already heard, Variations and run on the theme "Heroic", a Rondo and Triple Concert for piano, violin and cello. And to get directly to the topic, Concert no.3 op.37 in do minor, crossed by moments of great sensitivity in the solo register, beyond the stylistic rigor required by such a score - the monumental, spectacular, manly character. Is a moment of great finesse, almost imponderable in the cadence of the first part, before the return of the theme, a truly poetic Largo and a Rondo.Allegro finding his natural exuberance maybe a minute before the final agreement.

The distinction with which the pianist imposes itself, the precision, the stylistic accuracy, the delicacy that does not exclude the moments of bravery, and especially the elegance that we sense coming from far from the Land of the Rising Sun, is also noticed in Concert no.4 op.58. It is a welded team, because the sound of the Deutsches Symphonie-Orchester Berlin also contributes to the success of this project, of course under the wand of Kent Nagano.

We also reached the end of this integral: Beethoven - the Imperial - his final declaration on this territory that implies a solo-orchestral competition report, spectacular virtuosity, bravery, but also the fluency of a highly sensitive discourse. We find all these qualities in the recording proposed by Mari Kodama, plus a great dose of optimism that the pianist recognizes as a major influence. She, as a columnist from "Gramophone" writes, gives us her best version, in this Imperial Concert, especially in the third part interpreted with a feeling of liberation, I quote, "without any concern. in this world ", because, as noted in the promotional video, it is not very easy to manifest yourself fully, with the brilliance, deviousness and genius that we are accustomed to attribute to great artists, within a different culture of the European one. Mari Kodama is no doubt an artist, but she is also the perfect Japanese wife of great conductor Kent Nagano.

Also included is this Beethoven integral realized by an artistic tandem prized and admired in the musical world, in the project "Albums of the year 2019", on Radio Romania Muzical.