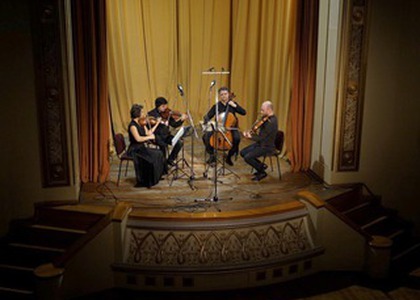 `Sonorous fantasy and colours`-a composer concert, has its national premiere with the quartet `Arcadia`

Hosted by the Romanian Youth Palace, the recital on Tuesday, 25th February brought back on the Romanian stage the quartet `Arcadia`, a valuable assembly that gathered international appreciation. Despite the youth of its members, the violinists Ana Török and Răzvan Dumitru, the violinist Traian Boală and the cellist Zsolt Török, `Arcadia` quartet has already reached maturity, which has quickly imposed itself as one of the best of their generation. As the recital`s title suggested, "Sonorous Fantasy and Sound", the evening of the 25th of February offered us an hour and a half of music perfectly adapted to these premises, the fantasy and colour being elements that are profusely found in composer`s Mieczysław Weinberg music, who was acknowledged in his time as one of the followers of programmatic music. For the first time in Romania, the people in Bucharest were able to get in touch with colourful and pleasant music, sprinkled with visual suggestions, three quartets of the 17 signed by the composer, no. 5 op. 27, no. 8 op. 66 and no. 2 op. 3/145.

In the first part of the recital, we listened to the Quartets no. 5 op. 27 and no. 8 op. 66, two outstanding works through their pastel images and narrative suggestions. With a barely noticed presence of the folklore element, that was felt during the five and four parts respectively, Weinberg's creation drew attention by means of its special musicality valorised by the dialogues between the four interpreters. Ana Török - violin I, managed to express her part smoothly, through a soft sound, balanced by the instruments in the second plane, Răzvan Dumitru - violin II, and Traian Boală - viola, who had their shares of solo passages beautifully highlighted by their technique and power of expression, achieving an irreproachable dosage of feelings. It should not be overlooked the constant communication between the members and a deep relationship with the musical text, elements that were merged in a natural interpretation of all four instrumentalists.

Of the three performed works, the last score in the recital proved to be the most compelling and demanding moment, from both expressively and technically point of view, the Quartet no. 2 op. 3/145. Proving her interpretative qualities, `Arcadia` energetically ended the recital by keeping its listeners attentive and captivated to the last sound.

The cellist Marin Cazacu, director of the Romanian National Youth Center, was also present at the `Arcadia` quartet`s recital, and told us a few impressions: "A special event! Here, an event that spotlights a piece of music unknown to Romanians - these quartets by Weinberg, a contemporary composer of Dmitri Șostakovici, who, through the music he created, through these string quartets, proves fantastic creativity, rigorous preparation in the art of composition.

And what I listened to tonight, the performance of the Arcadia Quartet, seemed fabulous, because these young people treated this music with tremendous seriousness, a passion and a love for classical music in general, because it is important for them as well to understand the music and perform it in order to transmit emotions to others ... and they created this state of excitement at this special concert. They make a considerable move towards rediscovering a composer who I hope will remain in the history of music as a composer with great potential to create emotion. "

On the evening of the 25th of February, through its presence, the Arcadia Quartet offered us a sample of the work of discovering and exploiting music less known to the local audience. The interpreters are going to record all Weinberg`s quartets for a major the performers to print the full Weinberg quartets for a major record company in London - Chandos - thus signing the second full version recorded so far in the world.