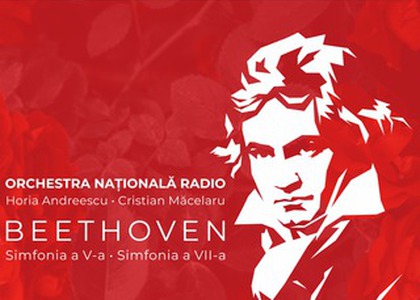 The year of Beethoven at The Radio House Publishing

In Beethoven's anniversary year - 250 years from his birth, TheRadio House Publishing celebrates the emblematic German composer with an edited version of the album Beethoven - Symphony No. 5, Symphony No. 7. The two famous works signed by the "Bonn Titan" are presented on a compact-disc in the brilliant interpretation of The National Radio Orchestra, led by the conductor Horia Andreescu, respectively Cristian Măcelaru.

The "Beethoven - Symphony No. 5, Symphony No. 7"album will be presented and broadcasted for the first time at Radio Romania Muzical on Thursday, the 17th of December 2020, beginning with 7 p.m. The broadcasting of the album will be preceded by the author's presentation of the compact-disc, made by the author of the booklet, AncaIoanaAndriescu, and broadcasted live on Radio House Publishing's Facebook page, beginning with 6:45 p.m.

The Radio House Publishing brings through this CD two Beethovenian symphonic states conducted by Romanian musicians found in distinctive phases of their careers, unfolded in very different contexts (even from a historical and geographical point of view): HoriaAndreescu andCristianMăcelaru. That intense experience of direct communication with the public from the hall can be felt in these live recordings from the seasons of The National Radio Orchestra as well. (Taken from the album presentation made by AncaIoanaAndriescu)

At the end of last month we celebrated 92 years since the first concert of The National Radio Orchestra was broadcasted.

Even some short excerpts from the artistic biography of the conductor HoriaAndreescudemonstrates the tremendous contribution of the reputable artist to the development of the Romanian musical life: artistic director and chief conductor, for many years, of Orchestras and Radio Choirs, main conductor and vice-general director of the "George Enescu" Philharmonic, founder and director of the "Virtuozii din București" Chamber Orchestra and the "Sinfonietta"Youth Orchestra, Horia Andreescu had at the same time bolaborations with famous orchestras of the world. His career as a conductor includes three posts of permanent guest conductor in The Symphonic Radio Orchestra from Berlin, The Philharmonic from Dresda and Mecklenburgische Staatskapelle Schwerin.

After his debut as conductor in the United States of America, at the Symphonic Orchestra from Philadelphia, CristianMăcelaruconsolidated his ascension in Europe as well, through collaborations with the Philharmonic from Berlin, The Concertgebouw Royal Orchestra from Amsterdam and through his 2019 debut at the BBC Proms Festival in London. In the same year he conducts The Concertgebouw Royal Orchestra and in Bucharest, at The "George Enescu" Festival. Once the 2019-2020season started, Cristian Măcelaru took over the Symphonic Radio Orchestra from Köln as main conductor, and starting with the 2021-2022 season he will take over the Musical Director of the National Orchestra of France post as well.