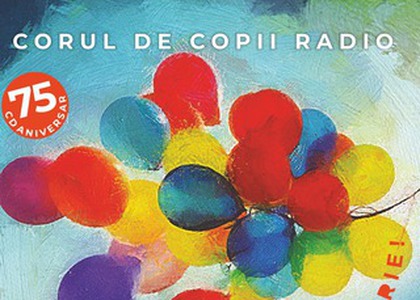 Ah, what joy! It is the title of a well-known song composed by Alexandru Pacanu, but also of the anniversary album of the Children's Radio Choir, an unique ensemble in the Romanian music landscape with an extremely interesting history. Founded in 1945, the Children's Radio Choir went up step by step, under the direction of conductor Ion Vanica, the founder of the ensemble, then Elena Vicic and Eugenia Vcrescu Necula, and fulfilled its role of radio formation, participating in shows (not only Radio, but also television), making recordings for the Radio Sound Library or on discographic support. The high level of the Radio Children's Choir was attested by collaborations with professional ensembles not only from Romania - the Radio Orchestras and the George Enescu Philharmonic - but also, thanks to the Enescu Festival, with the Munich Philharmonic, London, under the direction of international conductors. - Zubin Mehta, Lawrence Foster, Kristjan Jarvi, Cristian Badea, Horia Andreescu, Ludovic Bacs, Iosif Conta.

The Children's Radio Choir was named in 2004 the Cultural Ambassador of the European Union by the Federation of Choirs of the European Union. The title confirms the extremely rich activity of the ensemble, which has participated in festivals, toured and participated in international competitions in almost all European countries, but also in Japan, USA and Canada. The appearances of the Choir under the direction of Voicu Popescu remain memorable, the one who practically reinvented the ensemble with each new appearance on stage. Concerts-shows such as Happy Vision of the Pioneer, In the World of Walt Disney, The Sound of Musical, along with traditional Christmas concerts and other special events, enriched the band's repertoire, the stage experience of the members of the Choir and offered unforgettable moments to the publicof all ages.In 2015, the Radio Children's Choir held the opening concert of the Evmelia International Festival in Volos - Greece and qualified for the final of the prestigious international choral competition Let the Peoples Sing, organized in Munich under the auspices of the European Radio and Television Union. On this occasion, the ensemble performed in the Hall of the University of Music and Theatre in Munich and in Studio 1 of the Bavarian Broadcasting, and in 2017, the ensemble last participated in the opening of the George Enescu International Festival and the opening of the London Philharmonic Orchestra. the opera "Oedipus" by G. Enescu, under the direction of conductor Vladimir Jurowski.

Since 2018, the Radio Children's Choir is led by the young conductor Rzvan Rdos who confesses that he wants to continue the tradition created by the conductor Voicu Popescu, to perform thematic concerts every year. My young colleagues really like it, says the current choir conductor, even if the work rhythm is dizzying. Alternating events with modern repertoires (film music, jazz processing, pop, rock) with cult music programs (romantic, classical,preclassical) we believe can bring choral art to the attention of young audiences.We are currently preparing an online program for a CD dedicated to children and we aim to - after the pandemic - to hold as many educational events as possible at the Radio Hall. And we hope to be able to arrive in September 2021 in Germany where we are invited to an important festival dedicated to youth choirs, says Rzvan Rdos, who agreed to reveal some of his projects with the Radio Children's Choir.