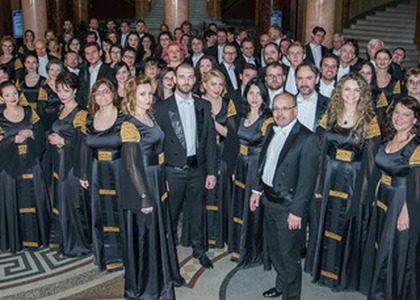 Vocal-symphonic concerto, with tickets and audience, at the ‘George Enescu’ Philharmonic

The Symphony Orchestra and the "George Enescu" Philharmonic Choir

Because of the restrictions imposed by the COVID-19 pandemic, there will be approximately 200 tickets on sale for each concert, the Great Hall of the Romanian Athenaeum being only occupied in proportion of 30% of its capacity.

The tickets will be on sale on Monday from 12PM, as before.

Tickets can be purchased as follows:

From the box office of the Romanian Athenaeum

Online, on ww www.fge.org.ro - "Calendar" section. Please take into consideration the fact that, once the online booking process has started, the seats will be locked for 30 minutes. The maximum number of tickets that can be purchased in an online session is 6.

In order to support the activity of the "George Enescu" Philharmonic, the payment processor does not charge the 5% comission of the ticket's value.

Once they are bought, the tickets can only be returned under the conditions provided by the law.

The concerts scheduled in the 2020-2021 session involve compliance with all safety measures to prevent contamination with the new SARS-CoV-2 coronavirus.

Access to the concerts organized in the Great Hall of the Romanian Athenaeum is only permitted until 6:50PM, and the public is asked to strictly follow the rules of protection and distancing.

The Friday concert, 19th February 2021, will be available on the online channels of the "George Enescu" Philharmonic: site, Facebook Page and YouTube channel.

The media partner of the event is Radio România Muzical.

The concert will be also available, on Friday evening, on the Facebook page of Radio România Muzical.

Founded on the 1st of December, 1950 by the then director of the Philharmonic, Constantin Silvestri, the "George Enescu" Philharmonic Choir had been administered by Ștefan Mureșianu, D.D.Botez, Vasile Pantea. When the legendary Constantin Silvestri founded the choir, there was an urgent need for a recovery, supported by the collaboration with consecrated names of the conducting baton: George Georgescu, Igor Markevitch, Georges Pretre, Lawrence Foster, Sergiu Comissiona, Cristian Mandeal, Ghenadi Rojdestvenski.

Since 1990, the "George Enescu" Philharmonic Choir has participated in extraordinary events within the Romanian musical life. Thus, the ensemble had the opportunity to collaborate in 1995 with the great Polish composer, Krzysztof Penderecki, and in 1998 they performed together with France National Orchestra and Lawrence Foster a concert version of George Enescu's Oedipus, within the International Festival with the same name. Since 1997, The Philharmonic Choir has been administered by conductor and pianist Iosif Ion Prunner, member and successor of a renowned family of Romanian musicians and people of culture.

Among the remarkable achievements registered in the last period are the collaborations with orchestras and international conductors within the "George Enescu" Festival: Daniel Barenboim and Staatskapelle Berlin (2013, in Four sacred pieces by Verdi), and Vladimir Jurovski and the London Philharmonic Orchestra (2017, in Enescu's Oedipus, a show also performed in the opening of the current season of the same British musical institution).

Born in a well known family of musicians (Prunner-Silvestri), present for over a century on the stage of the Philharmonic, Iosif Ion Prunner began studying piano with his father at the age of five. In 1997, maestro Cristian Mandeal, then director of the "George Enescu'' Philharmonic from Bucharest, entrusted the pianist and conductor with the management of the Philharmonic Choir. He was also asked to conduct concerts of the institution's Symphony Orchestra and Chamber Orchestra. Since 2018, the musician has been Deputy Director General of the Bucharest Philharmonic.

In 1991 he established the "Constantin Silvestri" Foundation and Chamber Orchestra, and in 1996 was the director of the International Conducting Competition with the same name. In 2003 he was awarded The Order of Cultural Merit in the rank of Knight for his entire activity.


Translated by Lica Alexandra,
University Of Bucharest, Faculty of Foreign Languages and Literatures, MTTLC, year I
Corrected by Silvia Petrescu
Return to Events