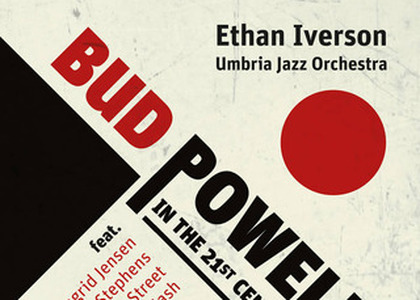 One of the most powerful explosions in the history of jazz took place in Harlem at the middle of the '40s and was called bebop. The outcome of this revolutionary moment is still felt and explored.Among the initiators of this current, Bud Powell is one of the more shadowed names, at least comparing to Thelonious Monk or Miles Davis, even though his pianistic style became an essential influence among the most imaginative instrumentalists. His compositions are essential, very accessible, but somehow different of the ones that became more known.

In any case, the Bud Powell brand has been evoked by many great musicians, among which we find the pianist and historian Ethan Iverson, known as a former member of The Bad Plus trio. He validates the composing genius of Powell through an exceptional album entitled "Bud Powell in the 21-st Century", a recomposition of a repertory for big band. Excepting two original pieces, Iverson updated Powell's compositions without affecting the initial intentions, with an admirable attention for details. The pianist's style from the bebop period feels in the same way with the depth of the approach and the sonorous dimension suggested by the contemporary musician. Therefore, the CD becomes essential not only in Ethan Iverson's career, but in Bud Powell's legacy too, to which is offered the opportunity of an evaluation closer to the true range. Iverson recreated with style the work of a legend, benefiting by the live interpretation of the Umbria Jazz Festival Orchestra.


Translated by Codescu Paula-Silvia,
University of Bucharest, Faculty of Foreign Languages and Literatures, MTTLC, year I
Corrected by Silvia Petrescu
Return to Jazz