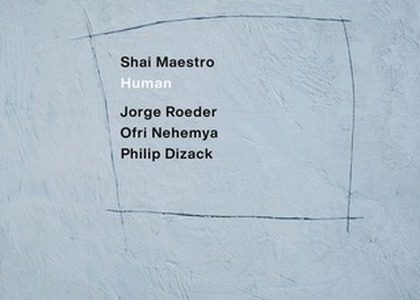 We meet again with Shai Maestro, the pianist remarked in the guitarist Avishai Cohen's band, which launched with its own discography through a music generously alimented with lyricism, emotional intensity and virtuosity. All these are manifested in a total concordance on the 'Human' album, on which the linked trio of Maestro, formed together with the guitarist Jorge Roeder and the drummer Ofri Nehenya, becomes a quartet through the addition of the trumpeter Philip Dizack. The pianistic style fits the alert spontaneity of the trumpet and, the way it got us used to, Shai Maestro extends surprisingly the musical expression while preserving the sense of tradition.

At the end of a set formed almost entirely of Maestro's compositions, the group offers in a characteristic manner a version of the known Ellingtonian theme, "In a sentimental mood";almost an hour of musical splendor, incisive, which we feel only in the providential encounters between the great musicians, strongly tight to common visions and passions.


Translated by Codescu Paula-Silvia,
University of Bucharest, Faculty of Foreign Languages and Literatures, MTTLC, year I
Corrected by Silvia Petrescu
Return to Jazz