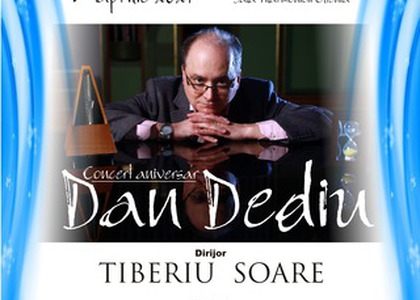 On Friday, April 2nd, at 19:00, the artists of the "Oltenia" Craiova Philharmonic invite the public to the Dan Dediu Anniversary Concept, with the conductor TIBERIU SOARE and the cellist MIRCEA MARIAN. The program will include two works in first audition, signed by professor and composer Dan Dediu: Fandacsia - Rhapsody on themes from the opera "A lost letter" (first absolute audition) and the Concerto for cello and orchestra (first audition). The event will be broadcast on the YouTube channel of the Oltenian Philharmonic and can be watched for free by accessing the link:

Tiberiu Soare is the conductor of the Bucharest National Opera, and starting with October 2020, the artist also holds the position of principal conductor of the State Philharmonic in Sibiu. Internationally, the artist's activity has consisted of collaborations with numerous prestigious ensembles, such as: London Philharmonic Orchestra, Kammer Ensemble N (Stockholm), Musica Vitae Chamber Orchestra (Sweden). From 2007 until now he is a permanent collaborator of the Calea Victoriei Foundation. As a lecturer of the Foundation, he has given several series of interactive lectures on musical topics, the content of which has been summarized in two volumes: Why do we go to the Opera? (Civil Society Gala Award 2014) and Nine Musical Stories (2016).

Dan Dediu is a professor of composition, he was the head of the composition department at the National University of Music in Bucharest, he is the artistic director of the "Profile" Ensemble, and between 2008-2016 he held the position of rector of the National University of Music in Bucharest. He is also an honorary doctor of the "George Enescu" University of Arts in Iasi. His music exudes energy, clarity of expression, melodic-harmonic certainty, based on a versatile sense of instrumental form and color, as well as an aesthetic oscillation between playful and tragic. The sonority of his compositions is defined by several elements: capricious staccato, unpredictable mood swings, intersections of temporalities, rich associative imagery, strong and memorable melodic motifs, precise psychological definitions made with only a few sounds.

"Fandacsia for Orchestra op. 170, also subtitled Rhapsody on Themes from" A Lost Letter ", was written in 2020 ... Why Fandacsia? Because it is a key word in Caragiale's linguistic arsenal. What other word would be better surprised by the motley world of uncle Iancu's characters? The play is dedicated to Tiberiu Soare, the one who impelled the writing of the opera "A lost letter", as well as this rhapsody.

"The four parts of the Cello and Orchestra Concerto make a diverse and surprising musical journey, in which the soloist is subjected to several rehearsals, as in an initiation ritual reminiscent of Mozart's" The Magic Flute ": 1. the rehearsal of water, of heroism and virtuosity, 2. the test of air, solitary meditation and immersion in memory, 3. the test of fire, dance and passion ".