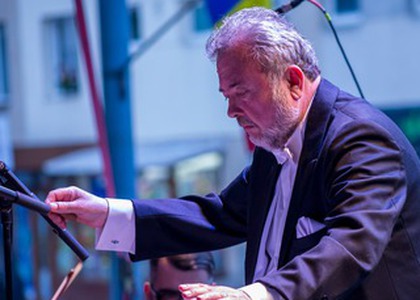 Tribute concert Camille Saint-Saëns, with 50% of the audience

As a result of the incidence rate falling below 1.5 per thousand inhabitants, the Pitești Philharmonic organizes on Thursday, May 13th, from 19.00, a new concert with spectators, with 50% of the public access. Along with the symphony orchestra of the institution, conducted by Alexandru Iosub, the violinist Simina Croitoru returns. The program of the concert is dedicated to the great French composer Camille Saint-Saëns, one hundred years after his death: Swan for cello and orchestra, Concert no. 3 for violin and orchestra in B minor and, in the first local audition,Symphony no. 2 in the minor. The soloists of the concert, the cellist Paul Oneci and the violinist Simina Croitoru.

Born in Piatra Neamţ, the conductor Alexandru Iosub attends the Music School in his hometown, the "Octav Băncilă" Art High School in Iaşi and the "Ciprian Porumbescu" Music Conservatory in Bucharest. He is also a graduate of the Faculty of Instruments-Singing, violin section. He revealed the secrets of conducting with masters C. Calistru, G. Vintilă and Constantin Bugeanu. He was a violinist at the "Mihail Jora" Philharmonic in Bacău, conductor at the Lyric Theater in Craiova and conductor at the "Oltenia" Philharmonic in Craiova, where he still works. He collaborated with the philharmonics from Arad, Bacău, Botoşani, Braşov, Craiova, Iaşi, Oradea, Ploieşti, Rm. Vâlcea, Sibiu, the Craiova Lyric Theater, the Galaţi Musical Theater, the Bucharest National Operetta Theater. He has conducted over a thousand lyrical performances of opera, operetta, ballet, genre concerts, over 500 symphonic concerts, chamber music, educational or entertainment. He also conducted the orchestra of the Pitesti Philharmonic in previous seasons.

Simina Croitoru is part of a family of musicians, being the daughter of Ioana and Gabriel Croitoru. From the age of seven, he won first prizes at international violin competitions. A graduate of the master's degree at the National University of Music in Bucharest, the young violinist gave recitals at the Romanian Athenaeum, the Dalles Hall, the Music Academy, the Radio Hall and at the philharmonics in Brasov, Oradea, Ploiesti, Cluj, Bacau, Pitesti. He has performed with the Bucharest Symphony Orchestra and the Sonderhausen Symphony Orchestra in Germany. He participated in art tours, giving televised concerts in: Italy, Austria, Germany, Switzerland, Czech Republic, Hungary, Turkey. He completed his studies at the Franz Liszt Academy of Music in Weimar. She was also present with the Pitești Philharmonic in past seasons, enjoying a real success.

Born in 1985 in Bucharest, Paul Oneci is a graduate of the National University of Music, in the class of Professor Aurel Niculescu. Winner of numerous national and international competitions, he has given, as a soloist, concerts in Europe and Asia, as well as chamber recitals. He received from the Pro College, an academy for gifted young people, the Diploma of Excellence in Classical Music. He has been an employee of the Pitesti Philharmonic since its inception in 2007, and since 2015 he has also been a cello teacher at the "Dinu Lipatti" High School in Pitești.

Tickets can be purchased at the box office of the Pitești Philharmonic, the price being 40, 30 or 20 lei, depending on the category of the place. Pupils, students and pensioners benefit from the related discounts.