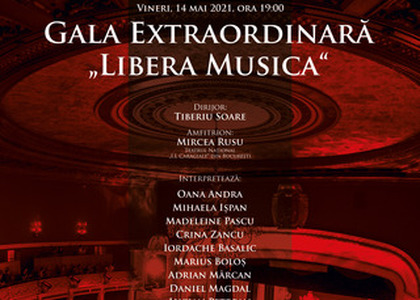 The Extraordinary Gala ‘LiberaMusica’, the first pilot event with an audience in the Main Hall of the Bucharest National Opera

At the initiative of the Ministry of Culture, the Bucharest National Opera presents on May 14th, at 19:00 pm the Extraordinary Gala 'LiberaMusica', the first cultural event which is part of a pilot programme regarding the resumption of performances in more relaxed circumstances, available only for those who are fully vaccinated for COVID-19.Maestro TiberiuSoarewill be at the conductor's rostrum, choirmaster Daniel Jinga, and the host of the event will be the actor MirceaRusu, artistic director of the "I.L. Caragiale" National Theatre of Bucharest. The Choir and the Bucharest National Opera Orchestra will participate.

Tickets can be purchased from the Ticket Office of the Bucharest National Opera or online at http://tickets.operanb.ro/

Acces is allowed one hour before the beginning of the performance.

This cultural event is part of a pilot programme regarding the resumption of performances in more relaxed circumstances.

At this stage of the programme, only those who are fully vaccinated for COVID-19 will have access , with the future possibility of being extended to all art lovers.

Participation to this event is allowed for the people who got both doses of the vaccine (complete immunisation with one of the authorised vaccines and 10 days after the second dose). The control will take place at the entrance by the employees of the institution, using the identity card, through the STS platform.

Wearing a mask is not mandatory during the performance, but the risk of transmitting the virus still exists.