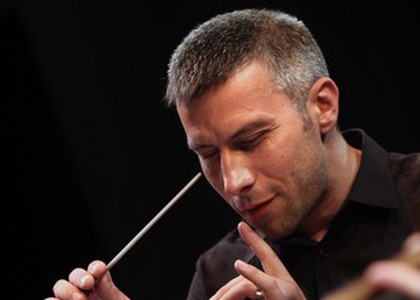 On Wednesday, June 9th, 2021, from 19.00, the first concert with the public of this year of the Radio Chamber Orchestra took place. Titled "The story of the first symphony", the event brought the creation of the composer George Stephănescu to the attention of music lovers, through three works performed under the baton of conductor Tiberiu Soare.

The Radio Chamber Orchestra met with the public again in a concert dedicated to the composer George Stephănescu, who is largely responsible for the institutionalization of the Bucharest Opera, today the Bucharest National Opera - a lyrical theater that celebrates 100 years this year. The program included three titles from George Stephănescu's creation - The National Overture, the Octet in G major for strings and blowers, as well as the Symphony in A major - the first work of its kind signed by a Romanian composer. The concert was made possible thanks to the partnership with the D'a Camera Cultural Association, an organization that aims to support Romanian creation by printing old scores. As was the case with the George Stephănescu Symphony, most of the scores composed by Romanian creators until the middle of the last century were not printed; the manuscripts were copied by hand and circulated between the musical ensembles in the country, perpetuating great copying errors, so that at present it is extremely difficult to be sung in such conditions. The lack of printing not only discourages Romanian performers, who avoid such scores, but excludes the introduction of Romanian opposites in the international circuit. Therefore, it is not surprising that a poster that includes quasi-unknown Romanian works does not attract an impressive number of music lovers. Or, from what I listened last night, George Stephănescu's creations deserve to be appreciated. In the National Overture, created on the classical pattern, the Romanian folk vein is exploited in a remarkable way, the Octet in G major for strings and blowers is a refined and original score, and the Symphony in A major, composed in the composer's youth, harmoniously combines European influences from the late nineteenth century, with a clear shape and an extremely pleasant sound. All these pages were interpreted accurately and expressively by the Radio Chamber Orchestra under the direction of Tiberiu Soare, the conductor who was involved in the process of reconstituting the Symphony. It is also worth mentioning that the meritorious action of the D'a Camera Cultural Association encountered many difficulties - the manuscript of the general score of the first Romanian Symphony could not be found, so it was reconstituted according to the knowledge that kept different notations, forcing a serious analysis in order to be able to restore the original form.

At the end of the concert, I met the members of the organizing committee of the events dedicated to the Year of George Stephănescu in public, Mr. Doru Gogulancea and Mrs. Cristina Lascu:

Doru Gogulancea: Nervous, I was able to listen live to the Symphony in A major, written when Romania was a Principality, it was not yet a Kingdom. It's a wonderful evening. Congratulations to the Radio Chamber Orchestra, which, after so many years, managed to play these three wonderful pieces. The octet for blowers and orchestra is an extraordinary thing, which can be sung very hard and the Symphony in A major, a marvel of a symphony, which we always listen to with pleasure.

It was not an easy evening. It hasn't been an easy week, I might say. George Stephănescu's scores required a lot of attention during rehearsals. Unfortunately, they were full of many inaccuracies and I am very glad that we will be able to return this Symphony in A major by George Stephănescu to the musical circuit. We could say that the D'a Camera Association managed to bring the result of a research in front of the public. We hope that this symphony will be sung as often as possible, it is worth it. I hope I convinced the audience that it is a work worthy of being presented on the pretentious stages, in a symphonic evening.

Report made by Florica Jalbă
Translated by Lazăr Marius Alin,
University of Bucharest, Faculty of Foreign Languages and Literatures, MTTLC, year I
Corrected by Silvia Petrescu
Return to Events