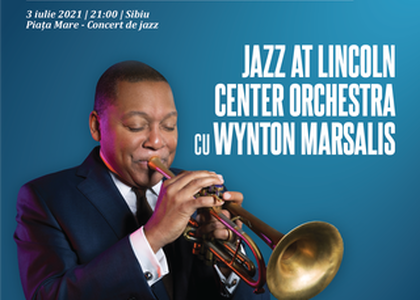 For the first time in Romania, July 1st-3rd, Wynton Marsalis and Jazz at Lincoln Center Orchestra

Wynton Marsalis and "Jazz at Lincoln Center Orchestra" are coming to Romania for the first time, in the 21st edition of the JTI Meetings - a tour special edition.

Soloist and composer Wynton Marsalis, the best known contemporary trumpeter, and "Jazz at Lincoln Center Orchestra" from New York, composed of the 15 greatest instrumentalists of the moment will perform a first Jazz Concert at the Grand Palace Hall, on the 1st of July from 8PM, on the same stage where, decades ago, "sacred monsters" of the genre such as Louis Armstrong or Dizzy Gillespie were present. This is not JTI's first encounter with jazz. In the 90's JTI presented the "Jazz Alive" series on the stage of the Palace Hall, where Chick Corea, Airto Moreira, Johnny Răducanu and other great names of the genre were present.

The third concert, a jazz one, will take place on July 3rd, from 9PM, in the Great Square (Sibiu), the heart of the city, which has become a symbol of the performance arts. The concert will take place during the Romanian-American Musical Days organized by the Sibiu State Philharmonic, being also a preview to the Sibiu International Theatre Festival, a special partner of the JTI Meetings.

Wynton Marsalis is internationally recognized as a musician, composer, conductor and promoter of American culture. He is the first jazz artist to perform and compose in the entire scale, from its New Orleans roots to modern jazz. He created and performed the most various genres, music for quartets, but also for orchestras, for step, but also for ballet, managing to expand the jazz vocabulary. Wynton Marsalis's creativity has been celebrated all over the world. Among other things, he won the Edison Award in the Netherlands, is an honorary member of the Conservatory of the British Royal Academy of Music and a Knight of the Legion of Honour.

Inaugurated in 2000 by the famous ballet company Bejart Ballet Lausanne, the JTI Meetings were mainly dedicated to dance, hosting well-known choreographers and bands, such as Alvin Ailey American Dance Theater, Gigi Căciuleanu and Chile National Ballet, Alonzo King Lines Ballet, Akram Khan Company, Martha Graham Dance Company, but also to music, especially in the beginning. The JTI Meetings were held annually, except in 2020, when they were postponed due to the pandemic.

Join us for the 21st edition of the JTI Meetings, an edition that brings in Romania the vigour and profoundness of American jazz music!

For the concerts in Bucharest, tickets can be found in the Eventim.ro network. For the concert in Sibiu the access is free within the available seats.