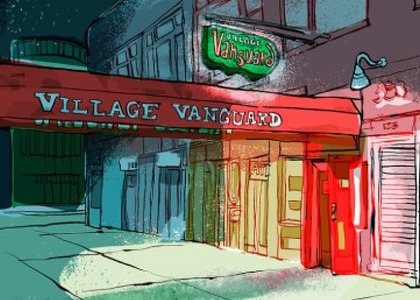 Let's start with Christian McBride, a unique force in the jazz world. As a bassist he has appeared on more than 300 albums and as a group leader he has appeared in different forms, different in instrumental spectrum, but unitary under the aesthetic signature of a huge artistic scope. In trio or with orchestra, McBride used everything he knew strictly in the service of musical content, for him it was always only about the value of musical expression and composition, never about the high base of the irreplaceable master.

Since 2009, he has given a set of concerts each year at Village Vanguard, New York's famous jazz club. In 2014, the music chosen for this event was a post-bop celebration, multi-structured, acoustic, with its own themes and prolonged improvisations, in the group formula called Inside Straight, with Steve Wilson on saxophone, Warren Wolf on vibraphone, Peter Martin on piano, Carl Allen on drums and of course, leader and producer Christian McBride on double bass. Only in 2021 does the recording on the album appear, becoming one of the reference productions, along with those signed by John Coltrane or Sonny Rollins, recorded in this historic place. The cover, the stereo, but especially the atmosphere created by this fabulous group, really send us into the ideal world of great jazz albums.