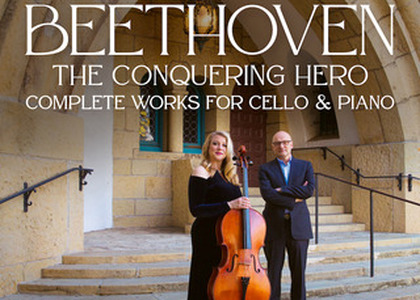 "Beethoven the conquering hero" – "The Conquering Hero" is the title of the discographic set released on January 21st by cellist Jennifer Kloetzel and pianist Robert Koenig. The title of this album comes from the famous choir "The conquering hero" from Handel's oratorio Judas Maccabee, a theme that Beethoven processed and to which he added 12 variations for cello and piano. It is a theme that evokes, according to cellist Jennifer Kloetzel, the essence of Ludwig van Beethoven's music – the joy and triumph of good.

Jennifer Kloetzel studied at Juilliard School, receiving from the prestigious New York Institution the "Peter Mennin" Award for her achievements in the field of classical music. JennoferKloetzel has given concerts and recitals on renowned stages in the United States of America, Europe and Asia; he founded the Cypres String Quartet in San Francisco, with which he recorded numerous albums, most of them comprising Beethoven quartets. Currently a cello teacher and head of the string department at Santa Barbara University, Jennifer Kloetzel has an impressive discography, comprising 37 CDs of songs from various styles, from 18th century music to contemporary creation.

Robert Koenig is a colleague of Jennifer Kloetzel's at Santa Barbara University. The musician teaches the piano at this prestigious institution and intensely promotes chamber music; he has given recitals on important stages in North America and Europe, collaborating with famous musicians such as Augustine Hadelich, Sarah Chang, Hilary Hahn and Jennifer Kloetzel.