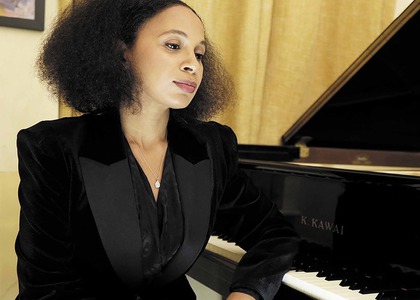 The album "African Pianism" was released on February 11th, featuring modern and contemporary pieces written by African composers: Ayo Bankole, Kwabena Nketia, Fred Onovwerosuoke, David Earl and Akin Euba. The performer is Rebeca Omordia, a young pianist of Romanian-Nigerian origin based in London, who has a rich activity. He performs and organizes concerts, makes recordings, and has so far had successful collaborations with the cellist Julian Lloyd Weber and the harpist Catrin Finch. She is acclaimed by UK publications as a creative musician, full of energy, emotion and interpretive virtuosity, and a pioneer in promoting African classical music.

Rebeca Omordia was born in Craiova, her mother being Romanian and her father Nigerian. He studied at the "Marin Sorescu" Art High School in his hometown and then at the Bucharest Conservatory. In 2006 he received a scholarship to study at the Birmingham Conservatory, later continuing at Trinity College of Music in London with Professor Mikhail Kazakevich. Later, Rebeca Omordia received her doctorate from the National University of Music in Bucharest. He has given recital tours in Nigeria and, in 2019, launched a series of African classical music concerts in London for the world premiere. Rebeca Omordia has recorded seven albums so far, focusing on the African and British repertoires. Rebeca Omordia collaborated with percussionist Abdelkader Saadoun for her recent album.