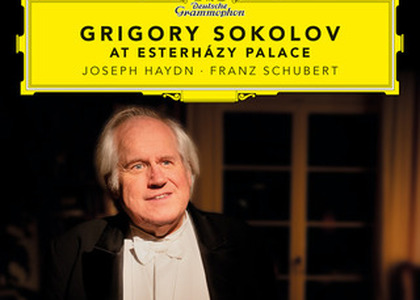 The album 'Grigory Sokolov at the Esterhazy Palace' - Music box, May 2nd, 2022

As expected, there are recordings from a recital that took place on August 10th, 2018 in the Haydn Hall of the palace where the famous classical composer spent much of his life, namely at the court of Prince Esterhazy in Eisenstadt, the residence Esterhazy family summer day in Austria today.

In fact, for many years, Grigory Sokolov, recognized as one of the greatest pianists of our time - even the greatest, if we were to quote some critics, appears only in recitals, considering that he can not control enough performances with the orchestra. And since 2014, after many years in which no record with his name has appeared, Deutsche Grammophon has convinced him to publish some of the recordings resulting from his live recitals. This is how 3 albums with sensational evolutions have already appeared - the one released on April 8 is the fourth.

And the quality of what you will hear next, shows us the same sensational pianist, who impresses by bending for detail, by the diamond grinding of his speech. The album includes 3 piano sonatas by Joseph Haydn and 4 impromptus D 935 - during the show on Radio România Muzical you can listen to Sonata no. 32 in G minor by Joseph Hadyn, a two-part work written between 1771 and 1773, which retains the gallant spirit of the eighteenth century, expressed in the rich ornamentation of Baroque origin, but which also has the stormy character of classical music , in a language characteristic of Joseph Haydn, wonderfully highlighted by the interpretation of Grigory Sokolov.

Undoubtedly, Grigory Sokolov is an artist of genius - you can rarely discover this impeccable construction of speech, this inclination to detail, without any concessions made to the personal ego. Humble in front of the music we find this extraordinary Grigory Sokolov, a pianist who has reached the age of 72 today, who hates advertising and, in general, any artifice. Along with him, we are directly propelled into the heart of great music - a feeling aroused by the audition of the 4 impromptus D 935 by Franz Schubert, in which you will hear the piano becoming a voice, that Schubertian voice that comes from the songs of the romantic composer. The ultimate accomplishment: to be able to play the piano as if you were singing with your own voice, with a simple speech in which decades of work and art searches are hidden.