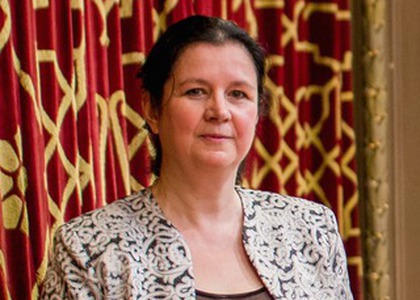 Tomorrow evening, the Bucharest National Opera will present the absolute premiere of the opera "The Lady with the Puppy" by Livia Teodorescu-Ciocănea. The libretto is written by Iuliana Kampert, based on the short story by A. P. Chekhov. The soloists, the choir, and the orchestra of the Bucharest Opera, under the direction of the conductor Vlad Conta, compete. Narrator - actor Marius Bodochi.

We find out more information from the composer Livia Teodorescu-Ciocănea:

Two decades after the premiere of the ballet "Red and Black", you are back on the poster of the Bucharest Opera with a new creation - "The Lady with the Puppy" after Chekhov's short story. It is a work that you created at the request of the Union of Romanian Composers and Musicologists; a score you worked on 2012-2015, with a libretto signed by your daughter,
Iuliana Kampert.

The absolute premiere of this concert will take place on Saturday. Please tell us, how is your new creation?

If you ask me to characterize it, I would say that it is, metaphorically speaking, an accumulation of torrents - musical, dramaturgical, lyrical and, above all, poetic. It is an intense work, in the Chekhovian spirit, an explosion of feelings, a reflection on love and happiness thwarted by social conveniences, on the emancipation of women at the end of the nineteenth century. Chekhov himself appears in this work. He notices his characters and participates in their commotion.

The work is designed in line with the great tradition of opera, with the intensive use of orchestra and choir. For soloists, I looked for vocal splendour and variety of expression. The orchestra is like an enveloping sound and magical environment over which the voices stand out, but also with purely symphonic moments - some, of character, others, full of poetry. I would call the style of the whole work a combination of neo-dramatic and neo-lyrical. The libretto followed the musicality of the words in Romanian and the rhythm appropriate to the musical phrasing.

In 2021, at the suggestion of director Alexander Hausvater, the script underwent several changes and additions. Also added was his directing and set design, as well as some new scenes. Please tell us about your contribution and what we will see on the night of the premiere. Will it be a concert show?

In 2020 I met the director Alexander Hausvater who had agreed to direct the opera "Lady with the Puppy", completed in 2015 as you said, as a commission from the Union of Composers and Musicologists of Romania. He suggested certain additions to the libretto and the following of a script conceived by him, reflected in the directions for directing and scenography, the captions, placed at the beginning of each scene. The libretto written by Iuliana Kampert remained in its entirety, to which a few moments were added in acts 3 and 4. This collaboration between the librettist and the director that took place in 2021 led to the finalization of the structure of this work that you will listen to for the first time. on Saturday, May 7, in the concert version, for now. We promise that next autumn we will work on the production of this work directed by Alexander Hausvater.

How was your collaboration with the artists of the Bucharest National Opera?

First of all, this premiere takes place thanks to the support of the general manager Daniel Jinga, in the context of the Centenary Season. A Romanian title for the first time was encouraged and promoted.

The musical realization of this work meant a very special effort from those involved. The conductor and master Vlad Conta, with rich experience in contemporary music, closely followed the musical training by participating in countless booths and ensembles. In recent weeks he has prepared the orchestra and conducted the sitzs and general rehearsals with extraordinary energy and exemplary professionalism.

Two distributions have been prepared, both of which are exceptional. The role of Anna Sergheevna was prepared by the sopranos Veronica Anușca and Simonida Luțescu, and the role of Dmitri Dmitrici Gurov by the tenors Adrian Dumitru and Lucian Corchiș. The role of Anton Pavlovich Chekhov was prepared by Vasile Chisiu and Daniel Pascariu, and the role of Nina Zaricinaia by Mihaela Stanciu and Andreea Novac. In the other roles, such as Irina Gurova - Claudia Caia and Andreea Ilie. In the role of Nicolai - Ion Dimieru and Iustinian Zetea. In the role of Vasiliev - Adrian Mărcan and Dan Indricău. In the role of Pavel - Andrei Lazăr and Valentin Racoveanu. Diederitz - Florin Simionca and Daniel Filipescu. And the four ladies - Ana Cebotari, Alexandra Manole, Andreea Grigore and Florentina Picuș.

On Saturday we will listen to the first cast, hoping to reschedule the second show-concert with the second cast, this season.

The narrator will be the actor Marius Bodochi. The choir also performed well in tackling this difficult task. I participated as a pianist in the preparation of roles and ensembles. It was a joy to collaborate, even for a limited time, with the artists of the Bucharest National Opera.