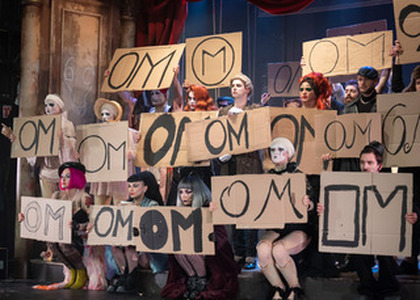 I find it increasingly difficult to comment on the musical productions signed by Răzvan Mazilu. I just start repeating myself because the superlatives are no longer enough for me. But it is certain that the director, the choreographer, and the costume designer couldn't achieve anything without a troupe of talented and gifted actors. I was so excited about the actors in the latest Excelsior theater show, Brecht-Weill's Three-Tale Opera, that I began to research their past - many of them had played Mazilu in shows - to read their CVs and interviews, to try to find a sensitive and profound "something" that can take me further.I was lucky and, in an interview given by the actor Mihai Mitrea to Georgiana Ioniță on spectacola.ro last December, I found this statement: Răzvan Mazilu. A man with a creative universe that seems limitless. Strict and stern, attention to detail down to the last stitch in the suit, with a mind-boggling work rhythm that sometimes feels overwhelming, but an extraordinary man without whom I wouldn't have been where I am today. Eureka! I found the key to the success of the extraordinary shows that brought Răzvan Mazilu a special UNITER 2022 Award for the development of the musical show in Romania. And, in this festive context, I don't forget to mention the nomination of Oana Predescu in 2020 for the UNITER Award for Best Actressin a Leading Role for the role of Morticia Addams in the musical show The Addams Family, directed, choreographed, and costumes by Răzvan Mazilu, and the Award for Best Actor in the lead role awarded by the same forum to Lucian Ionescu, in the same year 2020, for the interpretation of the character Gomez from the same show The Addams Family. The conclusion comes naturally. The right artists, in the right piece, at the right time. And, it seems that the moment of the Romanian musical has finally arrived (finally!). After the hugely successful Cabaret at the Odeon Theater, Răzvan Mazilu returns to the stage and to the actors from Excelsior with Brecht-Weill's Three Parallel Opera. The theme of the story: how to easily put your money in my pocket!? Begging has been around for a long time, but today it has reached the level of art! He who does not work has no right to beg! is the conviction of Celia Peachum, the wife of Jonathan Jeremiah Peachum, the king of beggars and the owner of the "Friends of the Beggars" company, which deals with the transformation of amateurs, worthy of all contempt, those who always remain empty-handed, into artists who know how to combine the image with the story with maximum effect always, at the end of a day of honest work, pockets full.Remember Nae Caranfil's Philanthropy?! 20 years have passed since then, it was in 2002. Of course, you remember, such a film cannot be forgotten. And if we go down the spiral, we pass the Three-Parallel Opera, premiered in 1928, so 100 years ago, and if we go down further, we come to the Beggar's Opera, a ballad written by the Englishman John Gay to the music of Johann Pepusch in 1728 so… 300 years ago. I was right… begging is an old profession since the world that - at the top - inspired great artists attracted by the laughter and weeping of the yeast life of society, a world ignored, deliberately erased from the ordinary field of vision, but which exists survival. Where?In Soho, London's most colorful neighborhood. And the German Brecht kept, for his three-parallel opera, the whole of the infamous London borough. The most important song of the opera is the one that introduces Macheath, called Mackie Shi; the most famous page of the work, a short play about the fantastic, unique character, because Mackie is the most rogue, murderer, thief in Soho. He isn't afraid of anything, he doesn't give up on anything, he remembers how he breathes, he is friends with the chief of police (with whom he was once an army comrade), he is a regular of braggarts, admired, feared and therefore respected by all. His world has nothing to do with the world of "honest" beggars raised by Jeremiah Peachum. And when he finds out that his own daughter, Polly, is the knife's girlfriend, despair reaches apocalyptic proportions.And, rightly so, because although he is in love with the girl, Mackie doesn't change his way of life, he continues to frequent, every Thursday, the known brothels, he is betrayed, he is caught and, if he had not been pardoned, miraculously, in at the last moment, it would have ended miserably with the noose around his neck.

One can already speak, in the Romanian theater, of the Răzvan Mazilu style as well as of "Răzvan Mazilu's actors". Lucian Ionescu is, of course, at the top of the list. The director appealed to him when he created an operetta characterMackie Shisha, with a wig, frills/beauty signs, and a gold-threaded frock coat. The operetta? you will ask. Yes, for the operetta, I answer.Even if the score is not an operetta… it is not a musical designed as such… it is a theatrical performance full of musical moments (after the models Shakespeare and Molière), a work experiment that today's directors have the freedom to think in his key. I think that still imbued with the Odeon Cabaret, Răzvan Mazilu wanted to remake, on another scale, the idea of a cabaret show with a political touch. The technique used is that of theater in the theater. On stage, the actors play in another clearly defined scene. They play and play in a way that imposes the conventional and the status of the intended carrier of the message. They don't want to be true… they want to be believed. They are beggars, they write their thoughts on cardboard signs but they are also actors who dream of a world of the rich dressed in expensive fur coats. The amazing and admirable idea of prostitutes in images of porcelain dolls, broken and damaged… From Brecht taken and kept sacred the piano placed in a stable, brought by friends as a wedding gift, a sign of an "authentic" nobility… From Cabaret translated the character of the Master of Ceremonies, exceptionally invented, thought out, dressed, played here by Marlene Dietrich... A subtle parody that triggers spontaneous ohs from connoisseurs: the introduction when Mackie is desperately waiting to be hanged, of the famous E lucevan le stelle area from Puccini's Tosca in the interpretation of tenor Jonas Kaufmann! - Yes, that's my idea. I wanted to put the classic opera "face to face" with the opera "deconstructed" by Brecht and Weill, who did not give a damn about the lyrical genre, Răzvan Mazilu confessed to me…. And the examples could go on. But! Like every time I want to write a musical theater chronicle - and not only - I realize that George Bernard Shaw's words (I think!) Excuse me, I've talked a lot, I haven't prepared! they are very true. With the variation Excuse me, I talked a lot, I read a lot, I learned a lot but I still haven't been able to say everything. And it would be much simpler for me to stop and urge you at this time. Go to the Excelsior Theater, to Mazilu's Three-Parallel Opera! I was, and I can't wait to see the show again.

by Bertolt Brecht and Kurt Weill

Jonathan Jeremiah Peachum, owner of the "Friends of the Beggars" company: Mihai Mitrea