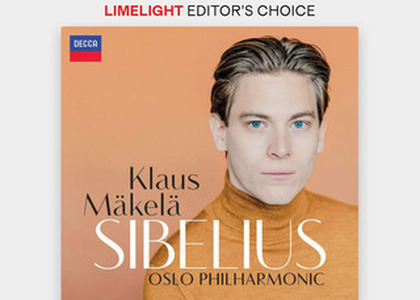 On the 25th of March, Decca record label released the debut album of Finnish conductor Klaus Mäkelä, a set of four CDs with orchestral tracks by Jean Sibelius: the complete set of his symphonies, the poem "Tapiola", and fragments of an unfinished 8th symphony by the Finnish conductor, all performed by the Oslo Philharmonic Orchestra.

Klaus Mäkelä is the first conductor after Riccardo Chailly, who signed a contract with Decca Classics. Being only 26 years old, he has an impressive career - he is the musical manager of the Paris Orchestra, the artistic manager of the Music Festival in the Finnish city of Turku and the Oslo Philharmonic Orchestra. The musician led this Norwegian orchestra for the first time in 2018 as a guest conductor, and in the 2020-2021 season, he became the main conductor of this group, which had a very special connection with Sibelius's music over time. In 1921, the romantic composer himself conducted three concerts at the stand of the Oslo Orchestra, the programme containing his creations. Now, more than a century later, the group comes back with a new, complete set of Symphonies by Jean Sibelius, proving the immortal spirit of these orchestral creations of monumental value, of which conductor Klaus Mäkelä says: "Everything aboutthe music of Sibelius is original. He was able to make an entire symphony sound like a gesture or a breath of air."

The seven symphonies of Jean Sibelius, created between 1898 and 1924, reflect the extraordinary evolution of his musical style. Besides reimagining the structure of the orchestral creation in the early 20th century, he was the first composer that gave Finland its own musical language, different from the dominant German tradition at the time. Sibelius became an icon of national culture in his country, his orchestral scores having been performed in the last century by the great orchestras in Finland and around the world. And the Oslo Philharmonic started a tradition by playing Jean Sibelius's music, taking it to a new level with their most recent recording project led by conductor Klaus Mäkelä.

This project started being explored in the first season of the musician as a main conductor of the Norwegian Philharmonic, but many of the concerts in the 2020-2021 period were cancelled because of the pandemic, so the project became a recording one. With the season interrupted, the Oslo Philharmonic Orchestra and its young conductor spent most of the spring of 2021 performing the symphonies of Jean Sibelius. "We used to play and record continuously", Klaus Mäkelä remembers. "Sibelius's musical language, like that of any composer, must be learned. And the circumstances surrounding our recording were, actually, to our advantage.", adds the Finnish conductor. This set of four CDs is having great success already, receiving a positive review recently by international publications in this field, and its release was followed by a promoting tour: at the Konzerthaus in Vienna, the Elbphilharmonie Hamburg and the Barbican Hall in London, having the same scores on the programme, the ones which Klaus Mäkelä presents in a fresh and powerful interpretation, with a varied and spectacular bright speech.

About Klaus Mäkelä, the manager of Decca Classics record label, Dominic Fyfe, says: "He is the third conductor that has exclusively signed with Decca in the 93 years of this label's history, after Georg Solti in 1948 and Riccardo Chailly in 1978. He is a natural-born conductor: confident, charismatic, and musical. He has authority without being arrogant, he is cultured, and has a good knowledge of musical interpretation psychology, which has earned him the respect of many orchestras around the world."