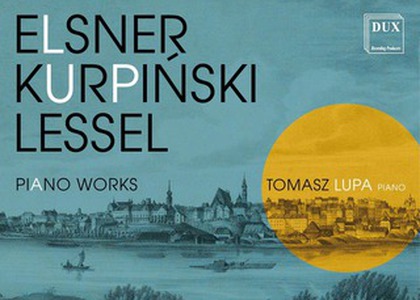 On the 4th of February a record including sheet music form the Polish classic-romantic repertory was launched, recorded by Tomasz Lupa, 45 year old pianist, professor at Chopin University from Warsaw. The songs of this record were written by three less known composers from the first decades of the 19th century, famous Fredric Chopin's precursors, who were connected one way or another with Warsaw, which was the most important cultural center in Poland at the time. Franciszek Lessel, Karol Kurpinski and Józef Elsner are the three composers chosen by pianist Tomasz Lupa for his record released at DUX Records, a record company with more than three decades of activity, specialized in promoting the classical repertory from Poland and the performers from this country.

Tomasz Lupa, the pianist, born on the 11th of August 1977 in Jaroslaw, graduated with success Academy Karol Szymanowki from Kraków, and he studied the historical keyboard instruments in 2003 and 2004 - at the International Academy of Music in Milan. He joined the teaching staff from the Chopin University in Warsaw in 2005, where he is still teaching piano, keyboard and org, after getting his PHD. The musician has played until now concerts in Europe, United States of America and South Korea, showing a varied repertory, emphasizing the classical Polish creation.