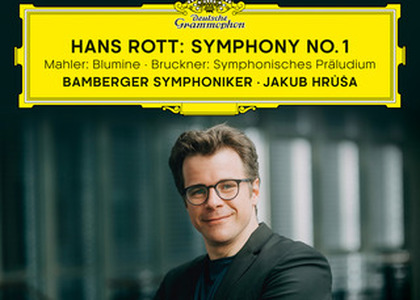 What I am recommending to you today is an album released on October 14th by the Deutsche Grammophon record label. It features the Bamberg Symphony led by Jakub Hrůša, conductor and music director of the orchestra. The CD contains three works - Symphony No. 1 in E major by Hans Rott, Blumine by Gustav Mahler and Symphonic Prelude in C minor by Anton Bruckner. By putting together these three rare works rediscovered in the 20th century, Rott could be deemed the link between Bruckner and Mahler.

Jakub Hrůša, 41, has already become an important name on the great stages of the world. He is currently Chief Conductor of the Bamberg Symphony and also Principal Guest Conductor of the Czech Philharmonic Orchestra and of the Orchestra dell'Accademia Nazionale di Santa Cecilia Rome. Two weeks ago, Jakub Hrůša was appointed as the next music director of the Royal Opera House in London after Antonio Pappano, an appointment with immediate effect, but the Czech musician will take office only in September 2025.

Coming back to Hans Rott, the writer of Symphony No. 1 in E major, he was one of Anton Bruckner's favourite students and good friends with Gustav Mahler, his two years younger colleague. Mahler regarded Rott as "the founder of the new symphony", but, unfortunately, Rott only reached the age of 25, so he didn't have enough time to showcase his avant-garde style or to leave a great oeuvre behind. The young Austrian's life was marked by misfortune and misery; in 1880, when he presented the manuscript of his first Symphony during a competition for a scholarship he desperately needed, Brahms (member of the committee) declared that Hans Rott was utterly untalented and didn't belong in the industry. His opinion was also taken into consideration by those who were initially willing to play the score of Symphony No. 1 in concert. Consequently, this impacted Hans Rott's career, who was only 22 at that time. He also fell into a deep depression, which provides another reason for his limited oeuvre. Hans Rott's Symphony No. 1 in E major was performed for the first time in 1989, more than a century after his death! It opens up with Wagnerian sonorities, it thrills the audience with its impressive dynamism - striking crescendos or sudden transitions from low notes to fortissimo. There is a flawless slower second part that ends with a long chord lasting more than 20 seconds. The bright, celebratory third part is followed by a much broader final one. It is a remarkable performance of the Bamberg Symphony, conducted by Jakub Hrůša, an amazing endeavour that showcases not only Rott's talent but also that of the Bavarian orchestra. The latter stands out through an extravagant timbre giving nobleness to its sonority, but also through itsflexibility, which accounts for Jakub Hrůša's great achievement. And if you were thinking that Rott's Symphony might have parts containing Mahlerian sonority, I can only tell you that it was finished eight years before his friend Mahler had completed his first one.

Jakub Hrůša has also included Blumine by Gustav Mahler on this album. Rediscovered in 1959, this score was part of Symphony No. 1 in D major, situated between what we now know to be the first two parts. But it was Mahler who removed it, thinking it was full of juvenile sentimentality. It is currently performed as its own piece, rarely included in the main Symphony.

The Bavarian orchestra was founded more than 75 years ago and its discography also contains valuable records produced together with the legendary Romanian conductor Ionel Perlea. From the new generation of Romanian conductors, Gabriel Bebeșelea and Cristian Măcelaru stand out as the most recent conductors of the orchestra.

The last work that Jakub Hrůša, Chief Conductor and music director of the Bamberg Symphony, has featured on this new album of the orchestra is Symphonic Prelude by Anton Bruckner. It was rediscovered after World War II and musicologists are still researching whether it didn't actually belong to one of Bruckner's former students, maybe even to Mahler. The charged score emphasizes all of the orchestra's compartments, which ignites under Hrůša's guidance.

The album is part of the "CDs of the Year 2022" project carried out by our radio station and can be found on the project's webpage on the româniamuzical.ro website.