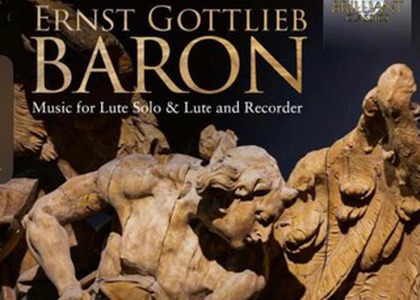 Born in February 1969 in Breslau, composer Ernst Gottlieb Baron studied Law and Philosophy at Leipzig University, although he devoted himself to music and traveled to different German cities at the same time, eventuallypublishing a treatise regarding a theoretical andpracticalinterpretation for lute, at Nüremberg, which engraved Ernst Gottlieb Baron's name in music history. He was a member of Prince Frederick of Prussia's court musical ensemble and maintained the position of theorbist until the time of his death, year 1760, in Berlin. His musical compositions remain almost unknown nowadays. And yet, we are left with some music sheets of thiscomposer, musicologist and lute player, which make up the program of the disk that we are offering in premiere at Radio Romania Muzical. These tracks grantinterpreters and musicologiststhe possibility to research the style used for German Baroque lute compositions, the lute being a very popular instrument in the first half of the 18th century. The sonatas and chamber concerts written by Ernst Gottlieb Baron were recorded in August 2021 at the National University Library Ivan Franko from Lviv and at SaintLazarusChurch, located in the same Ukrainian city, the album being released on the 1st of June 2022, at the Brilliant Classics music label.

Among all of Ernst Gottlieb Baron's music sheets, the ones that managed to reach across time were collections of chamber music dedicated to the lute, created in an elegant style, suitable for those who desire to broaden their horizons regarding Baroque music for epoch instruments. The pieces were recorded by Bernhard Hofstötter, a praised lutenist from Austria who studied Baroque music at prestigious institutions in Vienna, Haga and Koln. He won several awards and was internationally recognized for his successful discographic projects. For his recent album, he collaborated with two Ukrainian musicians, who studied at Mykola Lysenko Music Academy from Lviv: the cellist MariyaBil - who was part of the Philharmonic Orchestra of the same city - and BozhenaKorchynska, a flautist who won The International Contest Miroslav Hotkievichfor traditional instruments from Harkiv in 1998, being the head of the Flute Department at Mykola Lysenko Academy at present.