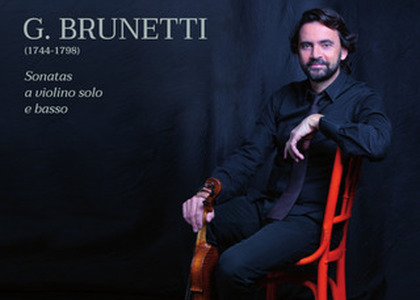 Until recently, the creations of the Italian composer Gaetano Brunetti were almost unknown among the classical music lovers. Fortunately, due to the efforts of some artists and musicologists who have discovered these scores, the composer- affirmed in Spain in the second part of the 18th century- returned to the public eye. Among the musicians who have contributed to this occurrence we shall include the Spanish violinist Carlos Gallifa, who studied at the Royal Conservatory of Music in Madrid, then in the United States of America and at the Conservatory in Bruxelles with Sigiswald Kuijken, being concerned about the interpretation of classical baroque music and the classical music regarding historical instruments. He plays a violin designed in 1784 in Paris by Leopold Renaudin and had concerts in Spain, Belgium, France, Portugal, Brazil and many other countries. He worked with the oldest ensembles of old music in Spain and, currently, he works as a teacher at the Toledo Conservatory and he is the leader of the chamber ensemble Galatea that includes Pablo Zapico at the baroque guitar, Javier Aquirre- violin and Alfonso Sebastian at the harpsichord. This quartet recorded last year in Madrid a disk dedicated to the sonatas for violin and basso continuo by Gaetano Brunetti. The album was launched on the 11th of March 2022, at the Spanish record label Lindoro.

The composer Gaetano Brunetti was born in 1744 in the Italian city Fano and during his life he settled down in Spain, under the reign of the kings Carlos the third and the fourth. He worked at the royal chapel and in the orchestras of the theatres from Madrid as a violinist, professor and composer, becoming in 1796 the musical director of the Royal Chamber Orchestra. Two years after he passed away. Unfortunately, Gaetano Brunetti released a very few pf the 400 music sheets for the chamber ensembles that he wrote, therefore they are very hard to be found. However, there were recently discovered 83 manuscripts with sonatas for violin and basso continuo by Brunetti, even though it is estimated that the musician composed more works like these. They represent the most important set of music sheets for the violin in the 18th centrury in Spain, works with gracious songs, structured in three parts, which, from a stylistic point of view, are at the border between late baroque and early classicism. These manuscripts have been preserved in the archives of the Royal Palace from Madrid, in the National Library of France and the Music Institute from Haga, and a part of them led to the record realized by the Galatea ensemble.