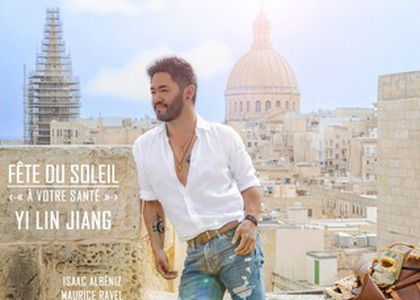 This autumn, pianist Yi Lin Jiang, a young and talented musician born in München, released his eighth album, titled Fête du soleil. Solar through the music he chose, this CD includes works by Isaac Albeniz, Maurice Ravel, Ottorino Respighi and Robert Schumann, works that inspired pianist Yi Lin Jiang during his travels throughout the south of Europe, during hot summers. He didn't decide on easy, light compositions, but rather on elaborated scores, which highlight the musician's skills, his preference for diverse and elegant tunes. "I pictured stories; I simply chose places I had visited in the past, where I wish I went again. I wanted to describe them through music," says pianist Yi Lin Jiang.

Born in 1988, the musician started learning piano when he was 6 years old, taught by Barbara Strauss, and a year later he won his first piano competition, followed by his first appearance on The stare when he was 10. Then he was taught by well-known German teacher Karl Heinz Kämmerling and held concerts on significant European stages, like Konzerthaus Berlin, Laeiszhalle Hamburg, Saint Martin in the Fields (London) and in all the concert rooms in his town, München, with a thorough repertoire, highlighting Romance and Modern creations. Yi Lin Jiang is an outgoing artist with good education; he can speak 6 languages and is always interested in different cultures from within the European framework; he uses the experiences he goes through in his musical works. Besides his activity as pianist at concerts, he is also a teacher, producer and founder of his own record house, Anclef, through which he recorded his latest album, Fête du soleil.