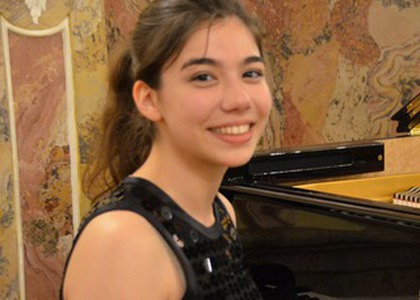 At the end of t6his week, Kira Frolu will be on the stage of the Radio Hall, the extraordinary recital from 15th of January being organized under the sign of the National Day of Culture. The event is part of a tour that start on 14th of January in Brașov and ends on 26th of January in Timișoara.

It is the first recital held at the Radio Hall this year, but you have already started your journey on this Bucharest stage. How do you see the reunion with the audience from the capital?

The January concert will be for sure a new experience, because even though it is the second recital I have at the Radio Hall, it is my first solo recital with audience, given the fact that my first one happened during the pandemic, being live streaming, but with an empty hall; therefore, I am very eager to also see how it feels when you go on stage and have an audience cheering and also the amazing acoustic of the hall. I am very excited to be back; of course, I am very nervous, since it is a very important place. Since I was a kid, I dream of being here. I have positive thoughts and I am very glad to have the opportunity to be back on the stage of the Radio Hall.

Beside the recital at the Radio Hall, we will also see you performing in Brașov and Timișoara. How did it come to this itinerary?

After I was informed that I won the "Romania's heirs" scholarship", the 2022 edition, as a part of the prize, I was invited to perform in different locations and along with different musicians and orchestras, and with the help of Cristina Comanadașu and of the team, I was able to put together these three recitals and a concert with an orchestra in Cluj. So, I want to thank them for helping me and were very nice to accommodate my period of staying in Romania, because in January, however, I have to be at school, in London, but I was given permission to come, of course, for concerts and everybody helped me organize and I hope everything will be as we planned.

There are a lot of discussion regarding the difficulties young artists encounter when starting a career. Talking about these problems that you have mentioned, how do you approach this early career?

I try to enjoy it as much as I can. A part of me has a lot of emotions and sometimes you think that things may go wrong or what might happen, if and if... but after all, I like to play and after this concert I have a lot of opportunities to do what I really like to do and I am beyond grateful for the chance I was given and for all the trust they offered me by inviting me to perform. I hope this is just the beginning of the road and that there will be much more things from now on. It is an amazing feeling to have the motivation to prepare yourself for these concerts and given the fact that I was already planning the repertoire for these concerts, there were a lot of ideas I had for future recitals that I hope I will have the occasions to share as soon as I learn the new works.

I hope every experience to come with more things to learn and to keep on improving myself and become better and better in the future.