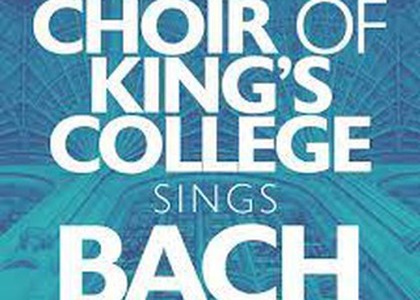 It's a feast to hear the King's College Choir of Cambridge perform Bach, a compilation released on 1 July on Warner Classics, featuring the finest recordings made over the years by this leading British musical institution in some of the world's leading companies - including St. Mary's Academy and the Royal Academy of Music. The most important recordings of this year's recordings from the British Music Academy include the St. Martin in the Fields, the Academy of Ancient Music, and the Concentus musicus Ensemble in Vienna, under equally memorable conductors - Sir David Willcocks, Sir Andrew Davis, Sir Philip Leger, Sir Stephen Cleobury and Nikolaus Harnoncourt. The sound is unmistakable, as is the range and musical excellence of these boys trained at King's College School in all seriousness.

The Choir of King's College, Cambridge gives us a lesson in history and longevity. It was founded by King Henry VI in 1441 to sing daily during religious services. According to the statute laid down by the king, poor boys under the age of 12 with a strong constitution and honest conversation, able to read and sing, were chosen. They were given clothes, daily meals and a small amount of money. The choir has spanned the era of the Tudors, the Stuart dynasty, the 18th and 19th centuries, to the present day. The 20th century of course brings a different perspective and modernisation. Dean Eric Milner-White founded 'A Festival of Nine Lessons and Carols' for Christmas Eve in 1918, broadcast live on Radio from 1931, a festival which still takes place today. In 1957, David Willcocks became the organist and Musical Director of the choir, followed by Philip Ledger, Stephen Cleobury and from 2019 Daniel Hyde. Chronicles mention how the value of the choir excelled or diminished depending on the skill of the man at the conductor's desk. There is also a list of the names of these music directors dating back to 1606.

Today the Choir of King's College consists of 16 boys, aged 9 to 13, 14 students and two organists. Beyond the strictly religious programme of the Chapel Royal, the Choir of King's College has a spectacular concert activity - tours in Europe, USA, China, Australia, participation in major festivals, album releases that set a standard that is hard to match. They have appeared at the BBC Proms countless times, often perform with the Academy of Ancient Music and the Britten Sinfonia, and also give a Christmas concert every year in London with the Philharmonia Orchestra.

The Choir of King's College has consistently performed the music of Johann Sebastian Bach. It dedicated its first recording to him in 1929 under the title "His Master's Voice". In fact it could be said that the ensemble specialises in the Leipzig Cantor's repertoire, releasing countless albums. We are in fact listening to a compilation of the most valuable recordings made over the years, a material that is also valued for the fact that it presents in a compact form, like an encyclopaedia, some of the most famous choral episodes from Bach's cantatas, oratorios and passion pieces, thus we can notice his writing, the expressive quality, the breadth and monumentality of his sonorous discourse, as brilliant as in Handel's case - otherwise comparisons between the two Baroque composers are pointless.