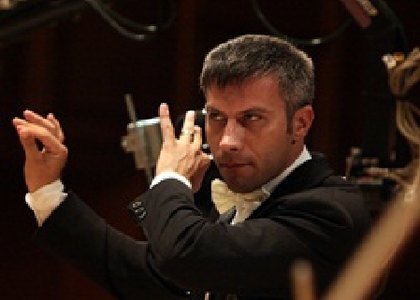 'Norma' - Opera in Concert at the Radio Hall

Norma, Vincenzo Bellini's famous creation which became so well-known especially to the Casta Diva aria and to the brilliant interpretation offered by Maria Callas, will come to life at the Radio Hall with an exceptional cast, under the baton of Tiberiu Soare.

What are the challenges in the approach of a performance such as Norma when it is under the form of a concert?

They are significant. The composer's directions often refer to stage movement and he wanted this to be reflected in music. For example, a choir heading backstage, an orchestra which needs to be heard as from somewhere outside…all these effects had to be recreated, reinvented especially for the version of a concert on the stage of the Radio Hall.

How did the members of the Radio Choirs and Orchestras react to this work?

Their response was excellent. The music is splendid, you can't help but like it. I don't think that there is a single person who can say that they don't like Vincenzo Bellini's music. They reacted with a lot of dedication and professionalism; of course, the latter goes without saying, but I would like to emphasize their dedication. They enjoy this music and they want to convey it as beautifully as possible. That's for sure!

The cast is an interesting one. Elena Moşuc - everybody knows that - is an international star; just as Teodor Ilincăi is very well-known at an international level. An extremely interesting voice - Iulia Merca - that I noticed more than ten years ago is our guest from the National Opera in Cluj. I would also like to mention an extremely good and promising voice, a great hope of the Romanian lyrical stage in my opinion, and I'm very serious about this assessment: Emanuela Pascu, a mezzo voice that, I believe, is heading for an extraordinary career, both in Romania and abroad. Jean Kristof Bouton - the baritone of Canadian origin - is something really, really special…many music lovers will probably frown a little upon this choice, given that Oroveso, the role of Norma's father, is usually interpreted by a bass voice. Well, after a careful analysis of the score, of the voices involved, I realized that the role can be very well interpreted by a somewhat darker-voiced baritone, such as Jean Kristof Bouton. That also leads to a certain lightness of the phrase which reminds one, I believe, of the bel canto spirit. So, I said: why not? Let's try with a version of cantabile bass-baritone instead of a bass.

Music lovers are, of course, expected at the Radio Hall on Friday, 30th January, at 19:00. Regarding those who are not able to come or didn't manage to get tickets - I understood that the concert was sold out in a quite short time: I invite them to listen to their radios, because it might be one of those memorable concerts.