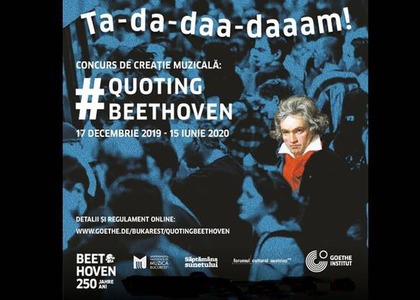 Interview with Joachim Umlauf, Director of the Goethe-Institut, Bucharest

In the following interview with Joachim Umflauf, the director of the Goethe-Institut, you will learn about the projectorganised by the Goethe Institute in cooperation with the Austrian Cultural Forum, the Week of Music and the National University of Music, Bucharest.

This year Ludwig van Beethoven is celebrated in our country as well as abroad, through festivals, competitions, concerts or expositions dedicated to the composer's life and creation. In the following interview with Joachim Umflau f, the director of the Goethe Institute, you will learn about the project organised by the Goethe Institute in cooperation with the Austrian Cultural Forum, the Week of Music and the National University of Music, Bucharest.

In December 2019 the Goethe Institute launched the Quoting Beethoven Project with a view to celebrating 250 years since the composer's birth. The music writing competition comes with an interesting rule, namely of reinterpreting, contemporizing or, as its title suggests, quoting Beethoven's music. How did this idea come up?

We are lucky to celebrate this year the 250th anniversary of Beethoven's birth and our aim, as a cultural institution, is to bring into the light artists, composers and musicians from the past, to connect with the present. We've come to this idea because Beethoven is the most popular and thewidest performed classical music composer ever and we've tried to figure out how we may draw the attention of young people as well as to those who may not be directly connected to classical music and Beethoven.

The competition is open to young artists' works, and the winning creations will subsequently be listened to in concerts at the Radio Hall. So you also thought of advertising them.

Of course. We offer other awards as well. The First prize consists of a trip to Germany, to the places where Beethoven lived, to Bonn, for instance. It is important to advertise the young artists' works and we will organise a festival in cooperation with our partners, the Week of Sound and the National University of Music, Bucharest, where the best creations will be presented this autumn.

It's worth mentioning that the works entering the competition are accepted regardless of their genre or style. Apart from that, what do you think the participants should know and and how do you advise them to take part in this project?

I think that it is essential for them to start from one of Beethoven's works and to try to develop their own creation, to find a way of interpreting and presenting it to the audience. We emphasize, thus, the young artists' and musicians' creativity.