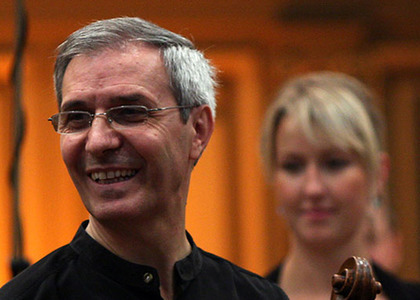 The Violoncellissimo ensemble, founded by cellist and professor Marin Cazacu, will hold a concert dedicated to the National Culture Day in Istanbul.

Mr. Marin Cazacu, there's an upcoming important event, dedicated to the National Culture Day, in which you are involved. On the 14th of January the Violoncellissimo ensemble, which you have founded, will hold a concert in Istanbul for the first time. What can you tell us about this event?

It is a unique concert for the Asian space. Indeed, the Violoncellissimo ensemble will perform for the first time in a very special concert in Istanbul, during a festival, which resonates very well here with the National Culture Day, which takes place on the 14th of January. The Romanian Cultural Institute and the "DimitrieCantemir" Romanian Cultural Institute from Istanbul are also involved, the organizer being the National Center of Romanian Youth Art. These young cellists have already performed in most cities in Romania and on the most important stages in the United States, France, Belgium, Germany, Italy, Portugal, this time we're performing in Istanbul. The music that we will perform, indeed, covers many genres from classical music to entertainment, there's some authentic Romanian jazz, rock and folklore.

In 2019, the ensemble successfully held its first tour. Will there be a second one in 2020?

The second tour will be in the autumn of 2020 in Romania, because the first one was very successful. The audience wants to see this ensemble again and in 2020, in fact, there will be many more concerts than during the first edition, as we set out to impress with this ensemble, because classical music is accessible and through the repertoire we want to make known the instrument that we love so much and that we use every day.

Also on the occasion of the celebration of National Culture Day, the Romanian Youth Orchestra will perform on the Romanian Athenaeum stage.

The Wednesday evening concert at the Romanian Athenaeum, held by the Romanian Youth Orchestra, conducted by Gabriel Bebeșelea, having as soloists violinist AlexandruTomescu and cellist ȘtefanCazacu, will be a special event, in which the most popular and beautiful works from the Romanian repertoire will be performed on the stage of the Romanian Athenaeum and I hope that the guests invited to this event will appreciate, both the quality of the performances and the presence of this orchestra, which gives passion and dedication to this profession, to the superlative.

What are the projects in 2020 for the Romanian Youth Orchestra?

The orchestra will perform, as always, both in Romania and abroad. For example, they will perform on international stages: in the Russian Festivals in Bulgaria, in Chișinău, Republic of Moldova, in the Gustav Mahler Festival, in Toblach in northern Italy, in the Alto Adige Festival, also in Italy, in Bressanone, in the Rhine Festival, in Kastel, Germany. Also, in Berlin, in a very special concert, dedicated to the National Day of Romania, with young musicians from Romania and Germany, the Romania-Germany Youth Orchestra and the Romanian presence will be numerous, because of the participation in the Magic Summer Festival and at the Enescu Festival and the music of the world, that's how they will perform, we could say, during this special year.