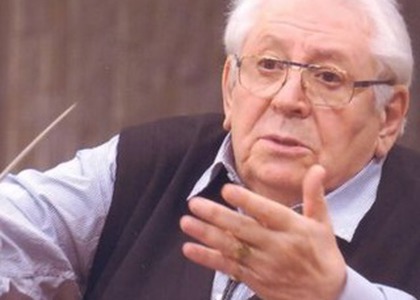 Interview with the conductor Ilarion Ionescu-Galați

A concert will take place at the Radio Hall held by the Radio Chamber Orchestra under the baton of Ilarion-Ionescu Galați and the soloist of the evening will be the oboist Ludovic Armin Cora. We will learn more about the chosen program and about the ensemble that he will lead inthis concert from Ilarion Ionescu-Galați.

On Wednesday, January 29, you will conduct the Radio Chamber Orchestra, in a concert entitled, 100% Mozart. Being a concert that marks the anniversary of the great composer, how did you choose the program?

I want to start by telling you something that interests me very much: is about the fact that the public knows my relations with the Radio institution, relations that are dating back to 1953, when I first sang with the Radio Orchestra, under the baton of Master Conta. I was a student at the music school back then. All my teachers, those from the music school, who sang in 1949 were members of the Radio Orchestra, under the guidance of the director of the music school, Emil Bâclea. Also, in the music school I had teachers such as the master Emanuel Elenescu, who was also my conducting teacher and with whom I recorded afterwards peaces from the concert, the "Shostakovich Concerto no. 1". I was the first Romanian interpreter of that concert. So, my relations with the Radio institution were very close, because I collaborated as soloist and conductor, for years and years. Memories related to my relationship with Radio are so beautiful.

As for the question related to the program, the concert will be a complete Mozart program, with an opening that will be sung for the first time in Romania, Mozart's legendary opera overture, whose debut was around 1771:it is called "Ascanio in Alba" . The opera has never been played in Romania, nor the overture has been sung. It's the first time it will beperformed. Then, there is the oboe and orchestra concert which is superb and the "Abna symphony", which is the symphony 35, a very virtuous symphony, a very successful symphony. What I want to say to you and what's important for the audience is that I found the chamber orchestra in excellent shape. In the orchestra there are some young musicians, of first quality and with whom we have collaborated and the relationships are very good, both strings, in the chapter of blowers, some very refined blowers, very talented and I hope this will be a very good concert.