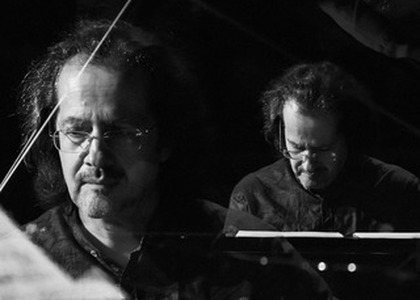 'Years after Petrucciani' - at Act Theatre

In the Jazz Season organized by Radio Romania Musical in co-production with Radio Orchestras and Choirs and Act Theater at the beginning of 2020, a new episode "Years after Petrucciani" is proposed

On January 6, the 21st anniversary of the French pianist's death, and on Wednesday, February 5, the percussionist Vlad Popescu and the contrabassist Adrian Flautistu will present Michel Petrucciani's musicalong with the pianist George Natsis, who is the protagonist of the following interview:

I remember that a few years ago there was a film playing on the cinemas of our country, a nice comedy called "If it's Tuesday, it's Belgium". It was about a group of tourists, you know.The same goes for us, if it's February, it's Petrucciani. It's been Petrucciany for ten years in February so far. One of our interest is to preserve the atmosphere and I may say , the sweetness and romanticism of Petrucciani's pieces. Even if we brought a few minor changes in rhythm and style to two of his pieces, we kept the same introvert note he had. Petrucciani was a pretty introvert and romantic person and a lonely man, as well. Reviewing the interview he gave when he was here, in Romania, I realised all this and possibly Iunderstood his music better.Indeed, one of our aims is to preserve... It's an interesting thing that the public have never asked us, "what are you doing? why are you playing the same pieces?" as he doesn't have many . Especially, pieces that you may play in a trio formula , well-done pieces that may sound good, we always get the same 15.

Did this project help this group coalesce more?

Well, I couldn't say that! It certainly did, but this is not the only one. All projects helps, since we are trying to enhance our stylistic area and consequently, each project is important in coalescing the group.

In connection with this, it is well known the fact that the project Years after Petrucciani is an exclusive project of the trio, but within a session you have some guests each time.Do you intend to adapt this program for a certain guest or a series of guests in the future?

We've already done this. At a certain moment we even had Cristi Soleanu as a guest, so there was a saxophone player along with the trio, but we keep the trio as an established formula. In the past few years we focused on the trio, because Petrucciani's music sounds excellent when played on the piano.