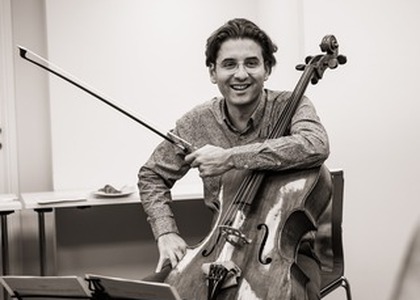 An interview with cellist Valentin Răduțiu

The first Wednesday of March will mark a new chamber music event at Sala Radio in Bucharest, which had been proposed by Radio Romania Music and Rotary Club Pipera. It's the recital of cellist Valentin Răduțiu and the Swedish pianist Per Rundberg, who will play the works of Serghei Rachmaninoff, Bohuslav Jan Martinů, and George Enescu.

On the 4th of March, you'll have your first chamber recital in Bucharest, at Sala Radio, and it'll be broadcast by Radio Romania Music. You know that the series of events are called Inheritors of Musical Romania so that it's about young interpreters of great value, who can be listened by the Romanian public quite rarely. I'm sure you take each public appearance of yours equally serious, but did you have a specific reaction when you had received the invitation? What did you think of the name of the series of recitals, for example?

Naturally, I feel very honored. Radio Romania Music had presented me with words of appreciation on the web, inclusively, and these words do mean a lot to me, and I'm glad that it feels, and I believe I'm feeling it too, that I'd built this relationship with Radio Romania Music. I've been following this relationship with the Romanian musical world in the past years, and it might be that the special closeness I feel towards Romania, Romania feels too towards me. And not in a sense that I'm flattered, but certainly on a much deeper level. To be honest, I'm delighted. Somehow, I've come to a point in life where the last years' work and the seeds I'd planted have grown up and bloomed. And what's concerning the inheritance, yes, it's difficult to say rationally... maybe we tend to see ourselves this way, always individually, thinking that we are disengaged because only through the intellectual force and the power of reason had we completed a particular route. But I also believe in this English saying, "No man is an island." We're always influenced both by what surrounds us and, of course, by our roots. So I speak about this relationship with Romania not because of diplomacy. I feel it powerfully, and I'm glad that it can be noticed how the international musical world is being enriched and filled by particular musicians - in fact, by many Romanian musicians. And not only those who had been or are taking part too in this series of concerts, but also those from the Romanian Youth Orchestra, for example. They're all the Romanians who play classical music and who, somehow, carry on the torch of music, in conjunction with Romania.

We could say that it'll be a chamber recital with a dual axis because the programme is meant both for those who're searching for the in-depth layering of chamber genres and those who love the instrumental performance. Therefore, we're speaking about the rarely heard Sonata by SergheiRachmaninoff - undoubtedly, a masterpiece, Variations on a Theme of Rossini played by Bohuslav Jan Martinů, to which is added Enescu, of whom we'll be talking about a bit later. What was your and Per Rundberg's purpose while putting together these compositions?

Per and myself, we love this Sonata by Rachmaninoff. I love the cello's ability to sing, to be a singer, and I also feel very close spiritually to Serghei. He had a specific perpetual nostalgia during his life. In a way, in his musical style as well, he'd experimented and brought the Romantic texture to the new horizons. He'd always remained related to a particular kind of composition, but with an incredible refinement with which he contributed to the evolution of the Romantic music. And also, as we know from his lifestyle, he was a grand-senior and enjoyed life and its pleasures, as it can be felt in his music. Therefore, I feel very related to Rachmaninoff spiritually. It is a masterpiece, indeed, as you'd put it because the piano part alone could be interpreted as a separate piece, and it'd be astonishing.

But, just like you were saying... It's now struck me that it's much truth in your emphasis. Rachmaninoff had intuited this vocality not many composers can cultivate - a lyrical, melancholic vocality of the cello.

Yes, it's true, and I believe that we must read both Tolstoy and Pushkin to understand Rachmaninoff. He does have this tradition of Russian folk and song singing. It's one of my favorite sonatas from the Romantic repertoire, and I'm glad to be able to interpret it in such a prominent frame, in a big Hall, which I'd be happy to be crowded. We're playing with the same joy and passion no matter if there are 20, 200, or 1000 people in the audience, but it's a special thing to interpret such a thing in such a context. The concert will also be broadcast on the radio, and we're happy to reach to the audience in front of their radio receivers. We also believe that this is a composition that can be touching to a significant number of people. It has the architectural complexity and the complexity of the musical ductus, but it also has certain accessibility and emotionality that could touch anyone, even those who don't know the chamber repertoire very well.

Variations by Martinů on a theme by Rossini... There are the same variations made by Paganini... So, in fact, they're variations of some variations. There is a previous work, and Martinů, in a way, is almost making a caricature, or he's getting close to the idea of making specific virtuous variations in a bit ironic way.