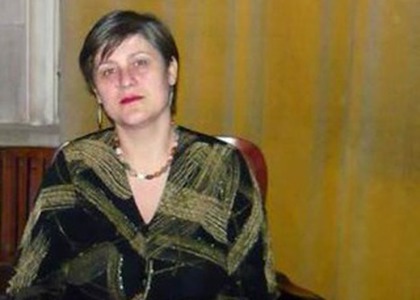 Concert in honor of the World Radio Day in Bacău, February 13, 2020

Mrs. Ozana Kalmuski-Zarea, you are a musicologist, music critic and deputy conductor of the "Mihail Jora" Philharmonic. You present to the public concerts of the season, the soloists you have. Today, on World Radio Day, you have organized another concert and all the tickets have been sold. How do you manage to attract the public here, in Bacău, what is the secret?

First of all, I enjoy the collaboration with Radio România Muzical, nothing seems random to me. In Bacău, at the "Mihail Jora" Philharmonic there is a tradition in scheduling contemporary music works as was the first audition of this evening of the Concert for three Cellos and Orchestra by Laura Ana Mânzat.

First of all, we have the Festival "Contemporary Music Days" in October, the first festival of this kind set up in Romania, but now I do not want to talk about this festival,but to mention that due to our efforts throught the years, I have made it possible here, for the people to hear during the season, first auditions of Romanian works along with the great works of the forerunners. Even our Philharmonic is named "Mihail Jora" due to the intervention of the late musician Grigore Constantinescu. And here, this evening we had three works from three different eras, Concert for three Cellos and Orchestra by Laura Ana Mânzat, Concert No.2 for Piano and Orchestra by Dmitri Sostakovici and Suite No.4 "Mozartiana" by Piotr Ilici Tchaikovsky.

What can you tell me about the quality of the performances?

I had the joy to find in the Concert for three Cellos and Orchestra by Laura Ana Mânzat and in the exceptional interpretation that the soloists Mircea Marian, Valentin Dimitrie Simion and Sofia Blându gave us, a feeling of "at home", supported of course by the instrumentalists of the Philharmonic Orchestra.

It seems that the audience in Bacău has a special attraction to all genres and musical styles.

Yes, because the phenomenon of contemporary art is has the same tempo as our life and that is why the reaction of the public here has been very beautiful. I do not mean myself, as a musician, I have always taken the pulse of the musical phenomenon after those who simply love music. I always found the most sincere reaction to them.

I appreciated all the soloists of this evening, the three cellists and of course the pianist Alexandra Silocea. She also performed Concert No.2 for Piano by Shostakovich at the "George Enescu" International Festival. Alexandra first came to Bacău many years ago, and she returned to us after a longer period of time, the first time in 2019 and now. In fact, she has been singing here with us since she was a student, she was encouraged to sing on a Philharmonic stage. Even though Bacău is a provincial city, there has always been a cult here to encourage young people and it is a pride to see them perform over the years.

And you brought an Italian conductor...

Yes, at the conductor's desk was Roberto Salvalaio, present many times on the stage of the Bacău Philharmonic . He has a wide musical background, he is also an interpreter, organist, he plays at bayan and bandoneon but not only that, he has also a musical work from which I would first notice the volume he dedicated to Astor Piazzolla. He finally proposed Suite No.4 "Mozartiana" by Tchaikovsky, a lesser-known but highly successful work.