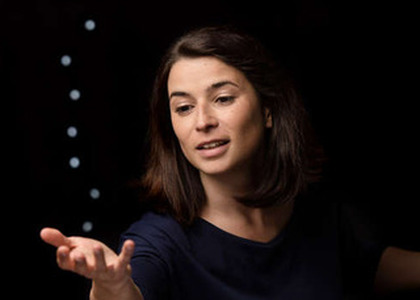 Interview with the pianist Mara Dobrescu (I)

On Sunday, 8th March , 2020, the pianist Mara Dobrescu returns to the stage of the Radio Room for "Amoroso - Concert of marties", an event that is part of the series " Radio Romania Musical Concerts". Along with Mara Dobrescu, the violinist Sarah Christian and violist Răzvan Popovici will perform the works of composers such as Wolfgang Amadeus Mozart, Ludwig van Beethoven, Robert Schumann or Maurice Ravel. In the first part of the interview for Radio Romania Musical, the pianist Mara Dobrescu gave us more details about the first steps on the path of the sound art and about her experience of the French academic environment.

The numerous awards and scholarships you obtained during your studies heralded a successful career, with performances on the stages of several continents. Until you get here, at what point did you realize that you would dedicate yourself to the piano and the sound art?

My life as a musician has somehow followed its natural course. I started studying the piano at the age of 6 and at the age of 8 I won the first prize at the Cita di Morcone International Competition, award given by Marcello Abbado; and this award meant a lot for me ... as a child, my talent to be acknowleged so early! And then, as you said, there followed many other awards, interviews, articles in the press and at the age of 11, I had my first concert with the orchestra ... these milestones in childhood are sure to be very important - each stage has its importance - and, somehow, it has become a way of life for me to be on the stage every month, to participate in competitions and I have never asked myself the question whether I want to continue or to do something else. When I'm on stage, I feel in my place, so to speak, and I'm happy! Each concert is a unique moment, a meeting with the audience that I look forward to.

After graduating from "George Enescu" High School of Music, you chose to continue your artistic training at the National Conservatory of Music in Paris. What persuaded you to choose the French musical environment?

I had the chance to take the masterclasses of the pianist Hans Leygraf at the Mozarteum in Salzburg as well as at Darmstadt and I was offered the opportunity to go to study in Germany, but in my heart France already had a special place. Eversince I was in school I loved very much the French language and culture and the way many artists like Brâncuși, Enescu or Cioran and others had fulfilled their destiny coming to France ... and all that made me choose France. And the teacher Gerard Fremy, with whom I chose to study at the Conservatory in Paris, had come to concert in Bucharest and, somehow, I said to myself this is the person I would like to study with. And so it happened thatI started my journey to Paris.

You benefited from the guidance of prominent pianists - you mentioned Gerard Fremy - but also Dominique Merlet, Jean-Claude Pennetier or Martha Argerich. To what extent did these masters influence you?

They influenced me a lot. In fact, at the beginning, I studied for 14 years in the class of the Professor Gabriela Stepan in Bucharest, and these 14 years were certainly very important. Then, of course, leaving for Paris with a scholarship from the French Government I had the opportunity to study with Gerard Fremy, Christian Ivaldi, Theodor Paraschivescu, Dominique Merlet and, naturally, they opened new horizons to me. Besides, at the Conservatory I had access to an absolutely extraordinary library, to a lot of records. After that, I met Pierre Laurent Aimard, who was very influential in choosing my repertoire; he is an ardent performer of contemporary music. And, of course, the extraordinary encounter with Martha Argerich or Master Jean-Claude Pennetier ... they made me believe in my dreams, find myself and, somehow, have the courage to create my own destiny. These personalities have become kind of role models for me and even today I'm trying to pass on what I received.